Well not so good a morning I guess, since I'm using this space to say RIP Jean-Paul Belmondo, who passed away yesterday at the still-too-too-young age of 88, as I am sure you're aware by now. If not I apologize for bearing such unutterable news! I hate it, I hate it. If I had my way he'd be around forever. But then he's one of the greatest movie stars the movies will ever have, so in his way he will be around forever -- his gentle stroking of his perfect lips in Breathless seen up top will outlive you and me, no doubt about that, and that's the way it should be. You can climb on yonder through MNPP's extensive JPB archives at this link -- there's a ton of visual pleasure to be taken in it, if nothing else. Go watch his movies for something else, more, I can only offer you the outside package -- one glimpse of him in action will transmit the rest.

If you've never seen a Belmondo film, where do you start, you ask? My favorite is Pierrot Le Fou, but Breathless is probably a better starting point. 1964's That Man From Rio and 1973's Le magnifique are also absolute blasts that don't ask much from the viewer, if the noodling art films of Godard ain't yer bag -- Belmondo could anchor something like Jean-Pierre Melville's Léon Morin, Priest and then go totally goofy in a series of overheated actioners -- such was his forever charm, and we're better off having gotten to experience it. 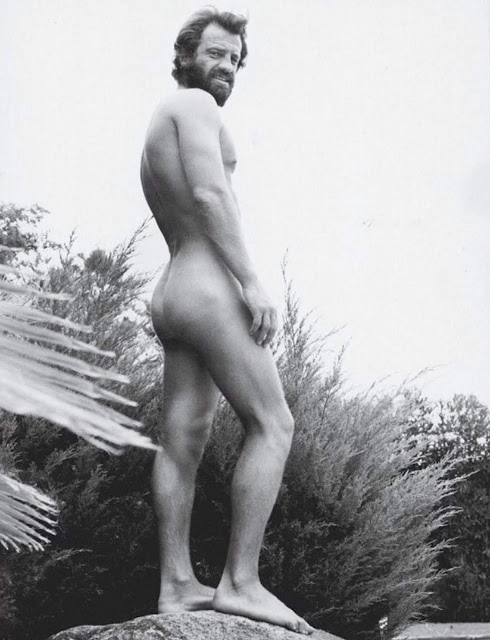 Please tell me your Belmondo loves in the comments!

In 1995, Claude Lelouch directed Belmondo in an adaptation of Les Miserables. Set before and during World War II, Belmondo plays an illiterate boxer and truck driver who helps a Jewish family escape to Switzerland. His "pay" is to ask the family to read Victor Hugo's novel to him. All of the characters find parallels between the characters and themselves. It's a long film, almost 3 hours. The version on YouTube doesn't have subtitles, but it's still a marvelous film. Of course, Breathless is a masterpiece and he's brilliant in it. Will he be buried in Montparnasse Cemetery near Jean Seberg, who has, I think, the saddest grave in Paris?

Off topic but still on the topic of handsome men: have you seen "Just Friends"? It's a 2018 gay dramedy from the Netherlands. The two leads are very attractive but one in particular -
Josha Stradowsk - is drop dead gorgeous and provides lots of bulge-y and butt-friendly GIF opportunities.

Plus it's a cute, sweet, 85-minute movie so it's perfect when you need to block out the world.

Sad news indeed. I wouldn't say I'm extremely well-versed in his filmography but he did drip magnetism and star quality. It was a definite plus that he could act but with the amount of star power he exuded I'm not sure if he hadn't been able to it would have made a big dent in his popularity, at least in his youth.

My top 5 of his film would run in this order: