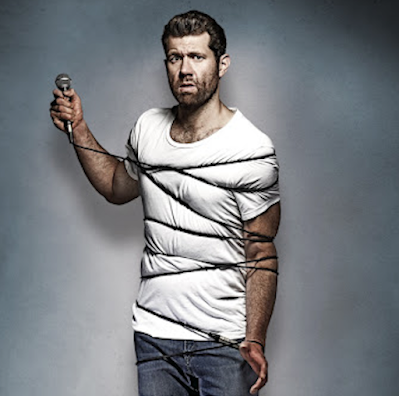 I guess I should be paying more attention here on the site to Bros, Billy Eichner's forthcoming "first gay rom-com from a major studio" that Eichner wrote, that The Muppets director Nicholas Stoller is directing, and which Judd Apatow (ugh) is producing -- I guess it takes the casting announcement that the very handsome Luke Macfarlane (from the show Brothers & Sisters) is going to star opposite Eichner to force my hand.

I always have to remind myself that I loved Difficult People when it comes to Eichner -- a little of him goes a long way (I couldn't with all the screaming on Billy on the Street, it's too much for me) and he seems aware of such, at least -- the cast that surrounded him on Difficult People was ace (I will forever be grateful to that show for introducing me to Cole Escola, for one) and so I look forward to seeing who else gets cast in Bros. If this truly is an Apatow Universe kinda movie there will be a ton of secondary characters. Give us Cole Escola again or give us death!

OMG you nailed it about B.E. - a little of him goes a long way. Spot on.

Give him a chance. His street show was schticky but he was good at throwing down some great lines amid all the shouting and rushing around. I like to think he might have some surprises ahead. Yeah, I'm easy...

Yes to both Luke and Cole. We saw Cole live about 2 years ago and he was great.

Difficult People! When I finally came across this gem on Hulu, I thought someone had been spying on me and my pack of Difficult Friends! And I can take a little of Billy Eichner's character from Billy on the Street, but he has a pretty good range as an actor. I already was looking forward to Bros. Adding Macfarlane is icing on the cake!