The Time For Dementia Is Now 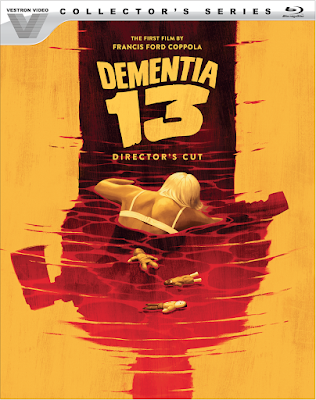 Any fans of Dementia 13 in the house? Widely considered Francis Ford Coppola's first film (i.e. not the couple of sex flicks he worked on just before it) he was told to rip off Psycho by producer Roger Corman, and came up with this black-and-white weirdo axe-murder flick in 1963 -- it remains one of my faves of his because he's just throwing so much down at once. Not that Coppola ever didn't thrown everything he had down at the screen at once, but this one's so early it's not burdened by any claims of "seriousness" -- it is just fun and nuts. We love fun and nuts! Anyway as you can see by that cover art up top Coppola's gone back to where it all began and made a "Director's Cut" of Dementia 13 for us, and it's hitting blu-ray (and 4K digital) on September 21st! Cannot wait to see this through fresh eyes. Here's the trailer:
Who? Jason Adams When? 5:47 PM