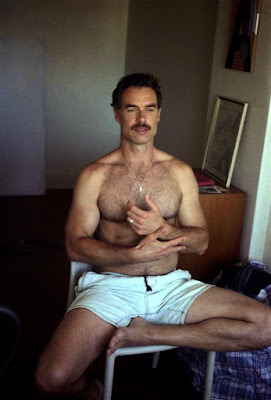 Tremendous news today that we must celebrate with THAT SPECIFIC PHOTO of actor Murray Bartlett -- Variety's just reported that Mike White's HBO show The White Lotus will be getting a second season! Huzzah upon huzzah! The second season will take place at a different resort location -- clearly Mike White has figured out how to travel luxuriously on somebody else's dime! -- but there might, he says might, be overlap with some characters from this first season showing up at the new location. If you had your choice which characters would you want to see show up again? I'd be fine with any of them honestly, but the one that would surprise me the least -- in that I really think it will happen -- would be Jennifer Coolidge's Tanya. White had written that other show for Coolidge that HBO didn't pick up, so he's clearly smitten. As are we all. Anyway here's my review of The White Lotus over at AwardsWatch, in case you missed it -- the season (not series!) finale airs this Sunday at 9pm!

Coolidge, no question. Also the easiest to bring along since she’s not attached to anyone. And I’d enjoy seeing Gage in another role.

I'm sorry but Coolidge is just dreadful. She is painfully one-note and miles behind her fellow cast members. I can't wait to see what Mike White cooks up for Season 2 but hopefully with someone - anyone - else attached.

I think it all depends on who was in the casket from Episode One. Hopefully we'll find out on Sunday. If it was Rachel, then Season Two could be Jake Lacy & Molly Shannon finishing the second half of their pre-paid honeymoon together. Maybe at the Four Seasons in Tahiti where a newly transferred Armand now works? lol

Coolidge is giving a dizzy, loopy, aching performance for the ages. She deserves an Emmy.

While I love Coolidge, her character is a bit of an energy suck so I'm not sure I'd want more time with her.

Whoever said Belinda has a good idea, although it'd be sad to see her still toiling away at a resort for rich people.

Can we get the hunky hotel worker/thief in season 2? I don't know how but he's so gorgeous I just want to stare at him more.

This entire cast is absolute perfection, from top to bottom. But as someone who works in a hotel, I think it would be fun seeing the entire cast of the hotel staff come back with a new group of guests. The future Emmy-winning star of this show, Coolidge, could come back as a resident of the hotel (it happens). I would die if they could get the grand dame herself, Jessica Lange, to check in, as she is a fan of anthologies (cough...Ryan Murphy). To watch her and Coolidge play would be a treat. But above all of my wishes, Bartlett has to remain. You could lose everything, but keep him and the show would be a killer. It's a terrific role for him, and he plays it to the hilt. But honestly I don't want to lose anyone...Zahn, Britton, Hechinger, Lacy...they're all that good.

I think I'd personally prefer if it was done in the AHS way, same actores, new roles. As it's not happening, I'd say Armond transfering to a new place would make sense, and Bartlett is amazing (though I have a feeling Armond's the one dying).