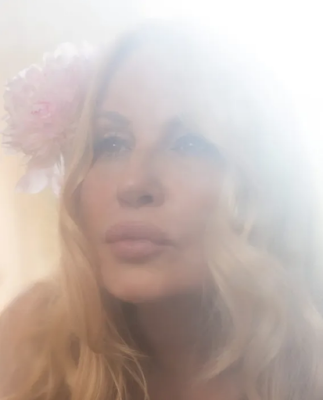 I'm still dragging, today's gonna be a bust I can tell right now, but thankfully not everywhere -- Vulture just shared a delight of a great big interview with the great Jennifer Coolidge which I very much recommend taking the time to read; she's got a couple of projects straight ahead for us including her co-starring role as a small-town rival hairdresser opposite Udo Kier in Swan Song (see the trailer here and read my review here -- that's out on August 6th) and then even sooner there's Mike White's new HBO show The White Lotus coming out this upcoming weekend, which... well I'll have more to say about that later this week but you should make sure your DVRs are set.
Re: Mike White though, the interview reveals that pre-Lotus he shopped around a totally different show which Coolidge would've been the star of; I gotta share this passage just to shame the execs at HBO -- give us this damn show, you assholes!

Even The White Lotus, her richest role to date, is something of a runner-up. White — who created one of the canonical Best TV Shows You Missed, Enlightened with Laura Dern — had first conceived of a different star vehicle for Coolidge called Saint Patsy. It was going to be a “paranoid road comedy” in which she would play an underappreciated actress who gets a call that she’s receiving a lifetime-achievement award from an obscure film festival in Sri Lanka but spirals when she comes to believe the award is an elaborate ruse concocted by her ex-boyfriend in an attempt to kill her. “Honestly, it’s the best thing I’ve ever written,” White says. “If someone made this show, it would blow people’s minds. Just think of Jennifer getting bitten by a snake in the Indian Ocean and running for her life.”
He says HBO passed. “I got close on a couple places, but the craziness of it was too much,” White says. “People were like, ‘Jennifer as the linchpin to a show, as your way in …’ I could just sense there was some anxiety.” He blames the generally limited ability of network executives to see beyond the roles a person has already had, a sort of self-perpetuating mechanism. “Jennifer makes the comedy about herself. The joke is always on her,” he says. “It’s a disarming way of going through life — a way to put people at ease and try to defuse anything. You make yourself the joke, but what happens is that sometimes people then confuse her with being a joke.”
So when the network asked White to make a COVID-friendly show they could shoot in quarantine instead — what became The White Lotus — he insisted on including a meaty role for Coolidge. She was his nonnegotiable. “The same way people feel about her in Legally Blonde is how I feel about her in life,” he says. “I want to see her win.”

I absolutely adore JC. She is so underused.