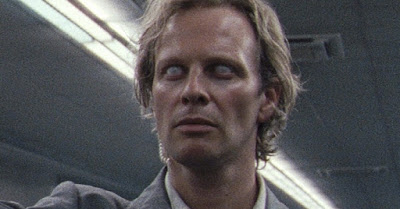 Raise your hand if you saw the 2018 horror film called Luz from Germany -- cut to me waving frantically, screaming "I did, I did!" And I reviewed it right here, saying "It might be a short movie (only running 70 minutes) but it digs out a ragged little mark of flesh, the sort of scar you won't forget soon -- I felt corrupted." I also shouted out Fassbinder and Cronenberg and Brecht, so you know I was smitten. Luz was the first feature from writer-director Tilman Singer but it proved one hell of a calling card, and today comes word of his next feature which will be, uhh, a big step up in the name recognition department.
His second movie will be called Cuckoo and it will star John Malkovich, Gemma Chan, Sofia Boutella, and Hunter Schafer from Euphoria. Oh and Jan Bluthardt from Luz (pictured up top) will be returning thankfully -- he made such a great creep. There's no info on what Cuckoo's about, but Tilman's set to film it in April and it's coming from the studio Neon so it'll definitely get a budget and a push. Wheeeee push it! Now go buy a copy of Luz and freak yourselves out so you can say you knew him when.
Who? Jason Adams When? 4:48 PM