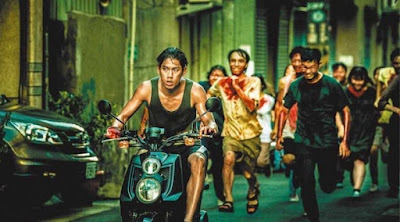 Remember what a strange thrill it was when Bub, the neck-shackled zombie in George Romero's Day of the Dead, who we've watched be tormented by the soldiers and scientists who in true Romero fashion proved to be worse than the undead throngs, figured out how to pick up a gun and cock it? The evolutionary upgrades we witnessed Romero's zombies adapt to from film to film to film were a pleasurable running thread through the great director's output -- each film we wondered where he'd take them next. Then came Danny Boyle's 28 Days Later, with its rage virus and fast runners, knocking everything up yet another notch. Where oh where could the zombies go from there?

Say hello to The Sadness from Taiwan, screening now as part of the Fantasia Fest and which goshdarnit found a way. And then some. And it will maybe make you regret even asking the question! I say that with no small amount of awe -- I was really quite struck dumb by The Sadness, and am not sure how to even write about it. Fantasia slapped a trigger warning on this sucker and it's with plenty good reason -- I don't recommend anybody with a sensitive constitution sit through this gnarly and deeply cruel fiend of a movie. Me, I am not that person, I took this sucker in stride, but man alive (or rather, I suppose, man not alive) did I have to turn away a couple of times. 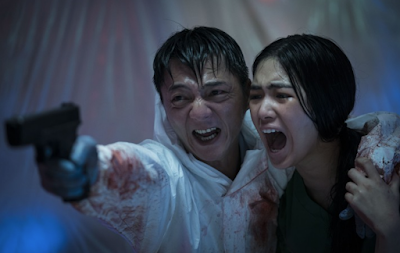 In a world of cucks and incels, rage babies screaming their most foul and depraved thoughts onto the internet, The Sadness' take feels in retrospect inevitable -- explained via some delightfully tossed-off scientific gobbledegook, the virus at the film's heart, the one that's turning all the good and decent people of Taiwan into slobbering monsters, does something like... well, yadda yadda connect people's impulse drives with their raw ids. And voila before you know it they're like the average Trump voter on nuclear steroids, which is to say racist raping perverts, cussing at and penetrating everything in sight.

Yes, you heard me right -- these zombies rape. Is that a spoiler I shouldn't share? I don't know how you don't warn people of that fact going in, ethically speaking. Anyway science makes these zombies subject to their every every worst urge, total cruelty, totally unleashed -- a pandemic of bloody perversions. Sex and violence swirl in a storm of gore and mayhem, each trauma trying to top the one before -- and by "top" yes I do mean "stick its zombie dick into" -- and yet somehow Canadian-Taiwanese writer-director Rob Jabbaz, and I can't believe I am saying this, actually makes it work?

I've seen a lot of go-for-broke gonzo try-too-hard horror flicks anyway -- hell there's probably a Lloyd Kaufman Joint that had Raping Zombies in it 15 years ago -- but The Sadness, as hard as it pushes its in-your-eye-socket offensiveness, well it just comes down to the fact that is well made, well shot, competently acted (by some really gorgeous leads, I might add), and effectively edited most of all. There are some terrifying sequences (one on a subway train is one of my worst nightmares), even ones without sexual violence.

But the thing is the scenes with the sexual violence actually feel justified by the world we live in, and we should be more angry at the world we live in for that then for this film reflecting where we've come as a culture. In the 1970s Romero was able to use the idea of the zombie to mock our Consumer Culture -- well some forty plus years later our culture is less concerned with our right to bear large-screen television sets, and more concerned with our right to be as free as we want to be at the expense of everyone else being damned. And the sexual anxiety of our times -- even just writing about this movie! -- is off the charts. I think The Sadness tapping into that, even in its over-the-top way, is meaningful and necessary -- it's Horror's job to wade into our muck and throw it in our face, and you'll leave The Sadness one hundred percent mucked up. 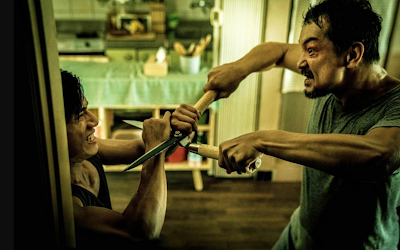 Whoa.
I actually wanna see this. Re-loading the zombie genre seems difficult these days, but this got me:
"And voila before you know it they're like the average Trump voter on nuclear steroids, which is to say racist raping perverts, cussing at and penetrating everything in sight."
We're not too far from this. I better start preparing.

LOL I think your being furious about everyone not being up to your devoted level on the history of "zombies who rape" doesn't say as much about me as it says about you, buckaroo, but have at it with your adorable lil' fit!