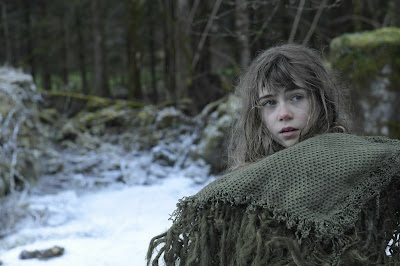 People tend to think of something being "obvious" as a bad thing, but there can be such enormous pleasure to be found when a film discovers a seemingly obvious way to tell a well-worn story that has somehow nevertheless never been cracked in that exact way before -- that is, when you only realize this path was right there in front of you when somebody comes along and knocks over some branches, slaps you upside the head, and they show it to you. You're like, "Oh my god how have I not been walking this path all along?" And All the Moons (Todas las Lunas), an epic yet intimate Spanish vampire story from director Igor Legarreta that's playing at the Fantasia Film Festival, finds one such path, and such pleasure will be yours if you behold it.

Telling the story of Amaia (Haizea Carneros), a young girl we first meet huddled with some nuns inside a 19th century orphanage as the terrifying sounds of gunfire and bombing outside get closer and closer, All the Moons reads to my eye as a Nosferatic spin on David Lowery's 2016 masterpiece A Ghost Story -- which is to say that it has the common sense to actually grapple with what it means to be immortal. What that would feel like. In its first act Amaia is plucked from the orphanage's rubble by a lovely but oddly intense woman (Itziar Ituño) who speaks in semi-riddles about how she and Amaia will now see "all the moons" together, and how they must avoid sunlight, and oh right here is some blood to help you grow strong...

It's obvious (there's that word again) to you and to me that Amaia has just been turned into a vampire child, aka the most tragic kind of vampire (just ask Kirsten Dunst and her forever curls), but the film never feels the need to underline those genre specifics that we've by then easily extrapolated -- it knows what we know when we know that stuff, and decides to focus instead on the elegiac sadness of this sunless immortal solitude. Yes Amaia has been saved by her very own strange angel, but saved for what? To what end? What now, now that now is forever?

The story, shot through with a gorgeous foggy fairy-tale dreaminess by cinematographer Imanol Nabea, now becomes episodic -- like watching Lowery's sheet-person wander through the world's rubble so too Amaia goes, making impossible emotional attachments in miniature, unable to watch seeds become grass before the tree's done been chopped down. She treads through time like water, washing past -- she never moves, still as ever; perhaps she's merely sinking in place. Her axis disconnected from the mainstream's. Her movement filed under other, indistinct from where our human eyes can watch it. We're all footnotes in her story seemingly without end.

How have I never seen a vampire story embrace this exact flavor before? Perhaps we had to find our way through the genre trappings on to the other shore -- we had to know the story so well the story itself could sit at the back for once. In some ways I remember Neil Jordan's Interview With the Vampire (sloppy as that film is) straining for the same backgrounded sense of time in a vague, here-are-new-costumes sense, but the poetry of this notion is wholly upfront and realized here -- a dissolution into the world's behind-the-scenes; a ghost at history's edges every so often nipping forth. It seems so, dare I say, obvious to me now -- this is how you should tell a vampire's story. This right here. Well this is what it would feel like.