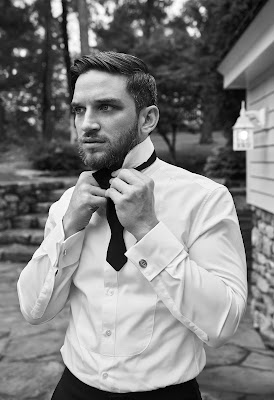 You'll be hearing more from me on the horror film The Night House starring Rebecca Hall and this here feller named Evan Jonigkeit tomorrow, when my review for it goes up at Pajiba. Indeed I'll probably just come back to this exact post and add the link when it's live, since it's still Summer Friday season and otherwise I'll probably be taking the day off. (ETA hey you, here is my review, like I said! I keep promises!) But I did want to exhale a very loud exhale in the shape and sound of Evan Jonigkeit, ahhhhhhhhhhh, because post-this-movie I am fully and freshly obsessed with him. He is an unexpected dream. And he is married to Zosia Mamet? Lucky damn Zosia Mamet. And I'd actually seen him in things before this movie -- Girls obviously (hence Zosia Mamet), but also Kimmy Schmidt and Broad City and then, fatefully, THAT SCENE IN BONE TOMAHAWK, YES YOU KNOW THE ONE. 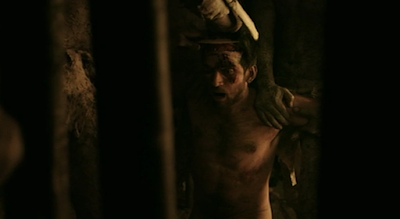 Honestly, as unforgettably horrific as that scene is -- and it's a scene nobody forgets if they've seen that film -- I'm always extraordinarily jealous of actors who've been cinematically enshrines in such a manner; hell that's what my "Thursday's Ways Not To Die" series is all about! How amazingly cool to own one of the most memorable death scenes ever slapped onto celluloid! I hope he got to keep a keepsake from that experience -- I would love to have a ruptured bust facsimile of myself sitting on a shelf in my home. Talk about a conversation starter! Aaaaanyway Evan is memorable for other entirely reasons in The Night House, and if you come tomorrow I'll share my review. For now just know we are keeping our eyes out for Evan from here on out! Here below is the film's trailer in case you haven't seen it, with the familiar caveat of mine that you absolutely should never watch horror movie trailers beforehand:

Pssst here is my review of The Night House!

we just saw the night house last night. we both thought it was great.
he has a really nice butt too in that lake water scene. 😂
happy belated halloween jason.