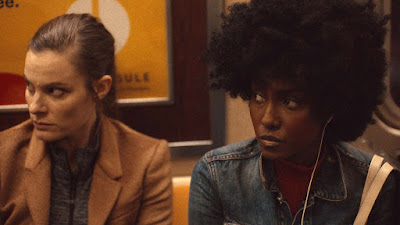 Every morning and every evening for the past twenty years I have looked around at the phalanx of common folks riding the subway trains beside me and I have wondered what their stories are. There have been moments during my time in New York -- September 11th or the big blackout in 2003 spring to mind -- when this endless wash of faces has slowed to a standstill; when knowing who's beside me has mattered because we're about to experience an experience together, strangers no more. And so you become trained to be aware -- if you see something don't exactly say the something, but do see the something and keep seeing it until you don't have to see it anymore. A sort of laser focus by side-eye.
Writer-director David Gutnik's superb new character study Materna (out in theaters this weekend and on demand on the 10th) is all about that tension -- about what happens when strangers stop being polite and shit starts getting real, if you will. It slowly introduces us to four different women all riding on the same subway car at the same moment as some kind of incident is playing out. One by one we see the start of the incident from each woman's perspective on the train, and then the film flashes back to show each woman's life before this moment; to show how they get where they are, sitting on that train within swinging distance of one another.
This isn't exactly clear for a bit, what's going on -- the film doesn't spell it out and so it takes a couple of stabs to understand the structure. It wasn't until the third woman's story that I understood we were seeing flashbacks to the women's lives before this fateful train-ride -- I thought we might be seeing them sometime in the future at first, in their post-incident lives. It's funny how traumas echo out forward and backward like that -- life, lived in memory, is constantly colored by both sides.
Storytelling is the exact same thing -- memory is storytelling, after all -- and so the way that Gutnik structures which story to tell when is plainly as important as (maybe more important than) any choices he's made here. I highlight that because the first woman we meet and journey we go on is by far the strangest of the lot -- Kate Lyn Sheil (who was recently seen infecting the entire world with her mental breakdown in Amy Seimetz's terrific film She Dies Tomorrow) here plays Jean, some sort of Virtual Reality game designer whose flashback has us watching (with hard echoes of Holy Motors) her have rough VR sex in a minimalist laboratory space, flailing about on its floor in one of those wired-up Lawnmower Man bodysuits.

This scene and the hysteria that tumbles out from its aftermath tinges Materna with a supernatural science-fiction feel that carries across the three sequences and women's stories that follow it, even while the remainder are all seemingly based fundamentally in the real world and the natural order of things -- it's a smart choice, elevating the realistic and purposeful mundanity of everything after, one that pays off big dividends by Materna's end when the "incident" on the train finally snaps into full, scary focus. This world should feel off a bit, and does.
Which is not to lessen the triumvirate of stories that follow -- they're each riveting little short stories in and of themselves, with their own purposes that feed into the larger whole. The second chapter follows an actress named Mona (Jade Eshete) as she attempts to expunge the traumas of her past life through her art; there's a fine frisson between performance and experience that this chapter foregrounds that's ultimately as important as arms are to a body. Every piece here builds on the others.
The third segment is my favorite because it stars one of my favorite indie-scene working actresses Lindsay Burdge, who you might recognize from The Invitation or Her Smell or especially Thirst Street, Nathan Silver's 2017 showcase for her particularly high-strung talents that I very much recommend (I reviewed it right here). Burdge tears into the character of Ruth, a panicked C.P.W. rich lady whose shitty teenage son is taking shape as Straight White Male Privilege Personified before her eyes. She's a coiled viper of class resentments, spitting out Facebook-esque screeds at her hapless Brooklyn-based beta-boy brother (played with calm exhaustion by Rory Culkin). An afternoon meal becomes a pained spectacle of hissing and slaps, all as the too big for even a townhouse dog (hilariously named Mariah Carey) barks, barks, barks up the tension to unbearable levels.
The final fourth, before Materna does its final reveal, is the quietest and saddest of the bunch, following Perizad (Assol Abdullina, who won Best Actress at Tribeca last year) on a trip home to her native Kyrgyzstan, where there's been a death in the family. Expanding the film the furthest out, literally to the other side of the globe, this segment also retracts inward, focusing itself down to a single stain on a single wall and an attempt to paint over and find a way to a resolved, less chaotic future. And that's a lesson we'll desperately need as we flash back from there once more to the fateful train, where chaos unleashed begs resolution, or maybe just a a hope and a dream and a wish thereof.
Who? Jason Adams When? 12:26 PM
Labels: reviews, Tribeca