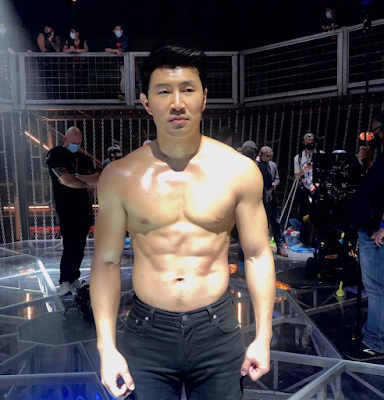 Shang-Chi star Simu Liu shared this very fine photo of himself on the set of that Marvel movie to his Insta over the weekend, alongside some righteous fury re: the CEO of Disney calling his movie an "interesting experiment" -- I'm sure this has been written about plenty by now with people with actual skin in the game, and I have no desire to come to the defense of anybody at Disney, like ever...

... but wasn't the CEO's comment specifically about their release strategy for the film, which is theatrical (in the middle of an ongoing pandemic) only? Liu seems to take the comment's meaning as having to do with the film's Asian-ness, and then proceeds to encourage everyone to go to the theater to prove a point in I must remind you the middle of an on-going pandemic.

I think Simu's been put in a terrible position -- he's not only got a lot riding on the success of this film personally, there's an entire community behind him counting on it, and it's being released theatrically in the middle of an on-going pandemic (why yes I will just keep repeating that phrase); there's no good angle. All I know is I personally really want to see Shang-chi but there's no way I'm going to the theater, and I very much wish they were going the Black Widow and Mulan route, dropping it on Disney+ same day if they must insist on releasing it now. Will any of you be going? Have any of you been regularly going to the theater? I'm just still not there, and most especially not with blockbusters. I'm so worried about Dune...
Who? Jason Adams When? 2:47 PM

Bob Chapek is the absolute worst! Whereas the "experiment" he referred to was the 45-day theatrical window for movies going forward, his lack of media training (especially in reference to such a culturally important movie) is lamentable. I am going to roll the old dice and see Shang-Chi at my local AMC. I'm thinking a mid-week matinee might be safest.

I have no doubt he is awful - how else does one get to be CEO of Disney, lol. I have flirted with the idea of checking screening seating maps out online, like the day of when I wanna see something, and if the theater's looking empty giving it a try, but here in NYC screenings usually aren't empty until weeks into a big film's run so I won't be seeing this timely, that's for sure.

Should probably moderate the comments here.
I've been back at the theatre since we could go, saw Respect at Williamsburg Theatre this past Sunday. I'm vaxxed, don't sit near anyone. I figure since I'm on the Subway everyday, why not?
I have no interest in this film, but I'll see it just for fun, probably at Alamo.

"Should probably moderate the comments here."

Ehh I don't know why that "plandemic" commenter has shown up here in the past few weeks with that nonsense but I'm kind of amused that they think they're gaining any traction, convincing anybody or hurting my feelings, when their comments are so plainly idiotic. It's like "Okay, you wanna waste your time on this I guess it's better than your usual spitting on grandmothers at the grocery store. You go to town."

I've gone to the movies a few times, but only when I knew it would be empty, or when forced to by work. I spend half my time on the subway running from people not wearing masks -- you can't do that inside a theater.

I live in a small town. I went to the theater to watch Respect on Monday night, and there was no one but me.

As an Asian myself, this is a big moment for us. And it's been a while since I last saw Tony Leung on the big screen. I love him so much. So I will definitely go watch Shang-chi.

Really jealous of small town movie lovers these days. To have an entire theater to myself, I could count on one hand the number of times that's happened in the 20 years I've lived here in NYC. Have fun, Ron!

I hope you can watch Shang-chi in a theater safely soon.

The only time I had a theater to myself was when I went to see that Yogi Bear movie with Justin Timberlake and I left before the movie was over, so I wonder if they stopped showing it then. As for Shang Chi, as much as I love Marvel, Brazil has handled the pandemic poorly so I won't be going back to theaters anytime soon. I'm just hoping I won't get spoiled by marvel fans on twitter.

Here in Canada we have things a little more under control than the dumpster fire I see playing out in the U.S., but I have still been cautious. I'm back to seeing movies on the big screen (The Green Knight deserved it) but the crowds have been very small and I make sure to get to early matinees when the theaters are even more sparse.