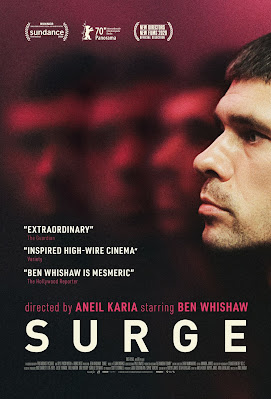 A brand new Ben Whishaw performance is always a thing to celebrate, even if this one's not so much "brand new" since it's been floating out in the ether so long a part of me thought it had already come out awhile back -- Surge premiered at Sundance in January of 2020 (and Ben won Best Actor at the fest), and then it was supposed to play at the "New Directors / New Films" series here in NYC not long after that, but then a little ol' plague occurred! And the movie vanished. Until today, that is. Today we have a poster and a trailer and the fresh hot brand new word that Surge -- which has Ben playing a security dude at an airport who has some sort of breakdown -- is hitting theaters and VOD on September 24th. Celebration! Watch the trailer here:
Who? Jason Adams When? 3:43 PM
Labels: Ben Whishaw, trailers

Have no idea who Ben Whishaw is but, I do love the Luca cover photo on top of your blog. 💚💙🙂

BW, exciting, great actor who's full range we have yet to see!