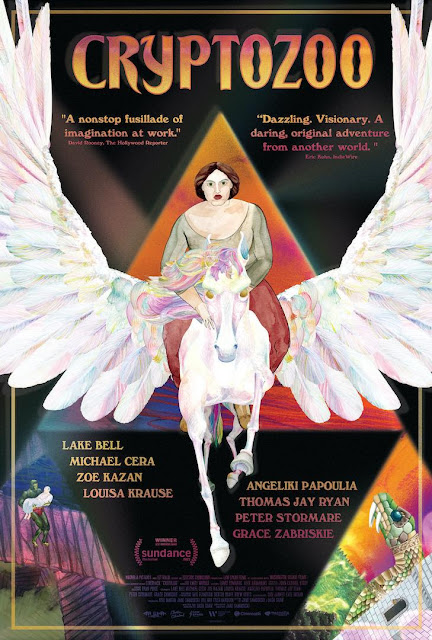 Lots of news about Sundance movies today! I just mentioned Franz Kranz's film Mass in my previous post and now here is the first poster and trailer for the animated-WTF-ery of Cryptozoo from filmmaker Dash Snow, which I also saw at the fest back in February.

The movie I have found popping into my head the most from this past Sundance has been Dash Shaw's Cryptozoo? Just checked and last I heard it's out August 20th -- very much want to watch again! pic.twitter.com/vkE0gRzKEJ

This is hitting theaters on August 20th, and here's how they're describing it (better to use their words than my own, which would involve a lot of stunned "ums" and "errs" and "ooh la las"...

"Visionary comic book writer/artist/filmmaker Dash Shaw’s vibrant, fantastical animated feature follows cryptozookeepers through a richly-drawn hallucinatory world as they struggle to capture a baku (a legendary dream-eating hybrid creature) and begin to wonder if they should display these rare beasts in the confines of a zoo, or if these mythical creatures should remain hidden and unknown. Featuring the voice talents of Lake Bell, Zoe Kazan, Michael Cera, Louisa Krause, Peter Stormare, Thomas Jay Ryan, Grace Zabriskie and Angeliki Papoulia, CRYPTOZOO is written and directed by Shaw, with Jane Samborski directing the stunning animation."

And now for that trailer: