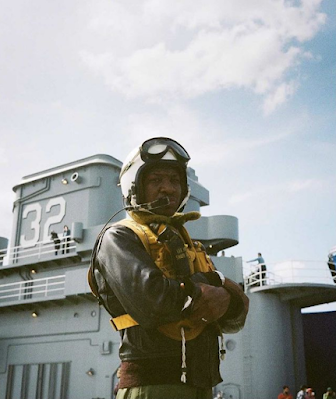 A new photo of newly-minted-Emmy-nominee Jonathan Majors in his forthcoming flick Devotion (via), which I've told you about previously... it co-stars Glen Powell and tells the true story of some stranded fighter pilots during the Korean War. As with anything Majors-related we are on this. Also I just noticed via the film's IMDb page that there's an actress named Serinda Swan (she's known for the shows Ballers and Inhumans and Graceland) playing Elizabeth Taylor in it??? If you click on her name there you'll see a picture and I can actually kinda see a resemblance? Especially the eyes. Anyway I'm guessing there's a USO show featured in the film, which is the only way I can make sense of Elizabeth Taylor being a character in this, haha. Maybe they reveal that in between shooting Little Women and Father of the Bride Liz actually bombed Seoul on her weekends off. Forgotten history is nuts, y'all!
Who? Jason Adams When? 4:32 PM