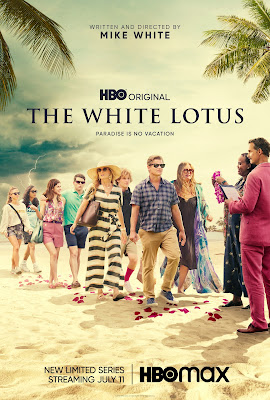 I hope you all know by now that a new Mike White project is a thing to savor -- they don't come nearly as often as they should, and they never last as long as we want them to, but every second of every one has been a blessing and a gift. And that score ain't changing with his new limited-series The White Lotus, which is premiering on HBO Max this weekend. (Watch the trailer here.) And so, out of sheer thirst I had intended to plow through my screeners of the show in the span of an afternoon when I first sat down with them a few weeks back... but couldn't, I just couldn't. The show was again too good, too much to rush through, and I took my time with it -- and I'm glad to see that HBO is similarly doling out the series on a weekly basis, because it benefits from that breathing space. Anyway I only finally finished watching the entire series last night and I wasn't sure I'd write anything, but as it does when it wants to be said the words just came pouring out of me today -- head on over to AwardsWatch for my review of the show. It's as great as anything Mike White has ever done, which is, uhh, some high praise I'd say.
Who? Jason Adams When? 5:15 PM
Labels: Jake Lacy, Jennifer Coolidge, Mike White, Murray Bartlett, reviews, Steve Zahn

Mike White? The hilarious guy from Chuck and Buck, forever ago? I had no idea he did anything since then. I'll have to check it out.

Pretty certain they release these on a weekly basis to increase subscription income, whether they benefit from "breathing space" or not.