Kit Puts the Short in Shorts 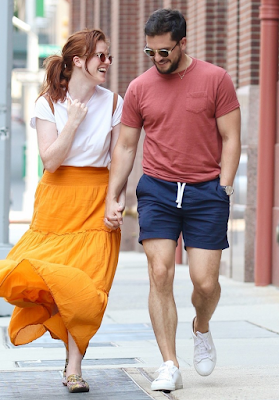 I know I'm supposed to write a light and frothy paragraph to go alongside these snaps of Kit Harington wearing some exquisite length shorts beside his wife and former co-star Rose Leslie as they romped through NYC yesterday (via, thx Mac) -- "Gee Golly no wonder Rose looks so so happy!" or some such -- but my mood's spiraled after that COVID scare in my office I mentioned this morning, and so these photos of Kit ONCE AGAIN behaving as if he's never even heard of the concept of a mask (I've freaked out at him specifically on Twitter several times over the past year) are just making me more irritable the longer I stare at them, instead of the usual things I used to feel when I would see photos of Kit Harington's skin.

Once again for the folks in back THE REWARD FOR BEING A GOOD HUMAN AND GETTING VAXXED IS PROBABLY NOT DYING. The dream some y’all selling of a rainbow utopia of maskless pre-pandemic free-for-all living is fucking irresponsible garbage and mollycoddling people is actually murder

I don't care if most people aren't wearing masks in public now -- most people are wrong, we should be wearing masks in public especially right now, there is still a goddamned plague happening, and as I watch our numbers tick back up I'm so not in the mood. So I apologize for clouding up the short-shorts pictures with my doom and gloom... except I don't -- fuck everybody. Just fuck everybody. I'm over it. On that note hit the jump for more... 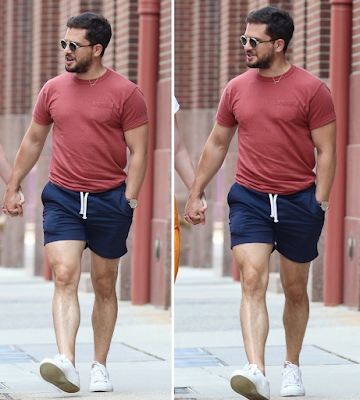 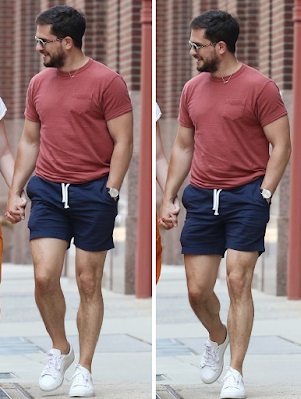 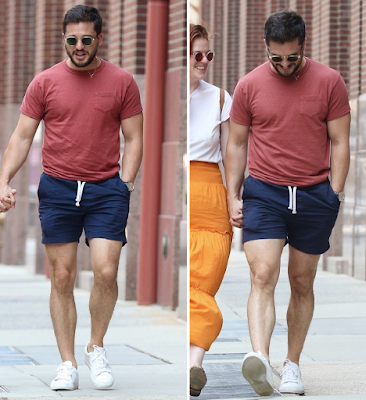 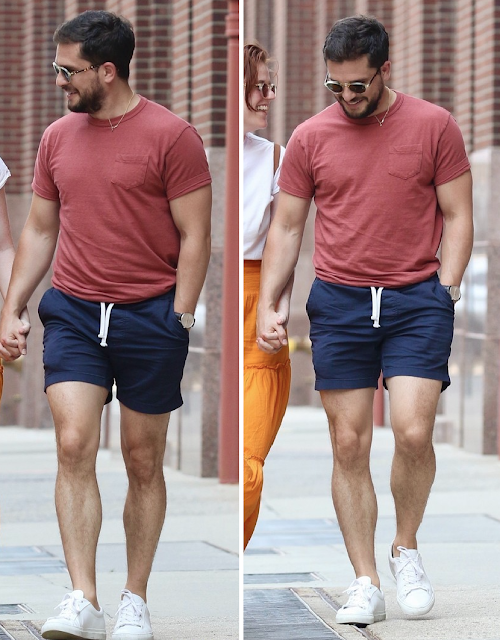 Where does he lives? In my hometown (Montreal) nobody walks around with masks. It wasn’t asked by Public Health, etc... Don’t want to excuse him, it’s just facts.

These photos are in NYC, where the majority of people - maybe like 75%-ish -- are no longer wearing masks. I agree, that is a fact. I also find it blisteringly fucking stupid, that fact, and infuriating, and will continue to tell people to wear a mask until this plague is done, which it is not. I've been a minority all my life, I can handle it again when the lives of everyone I love are on the line. COVID IS NOT DONE.

It’s a weird thing. I’m still very cautious and wear my mask as soon as I leave the house and almost never take it off. BUT on the news they’re always saying it’s ok to take it off if you’re outside. Again I personally don’t do it because I don’t feel its 100% safe but if they’re saying it’s OK I guess I can understand why people arent wearing it. .

As I said in the post I'm also just having a bad day today -- besides one of my co-workers being exposed to COVID this weekend because he was partying in fucking Fire Island my other co-workers has been LOUDLY COUGHING all afternoon so I'm feeling especially sensitive this moment. On another quieter day I probably would've just posted the photos and stared at his legs. I'll admit I am just especially fucking freaked out today. I'm allowed!

Covid is not done indeed. And in a densely populated city like NYC, masks should indeed be mandatory. It just wasn’t the norm over here. Rest, boo.

Masks indoors make some sense. Outdoors they are useless.

it really does suck. if people would just wear the mask and social distance for like 2, 3 weeks max, this whole thing would be over. But nooooo. we have our rights and freedoms to defend. no one can tell me what I should do. I'm a 'murican, dammit. never mind it could've all been over months ago if _everyone_ had just followed the guidelines. And yes, it's not over yet.

What a bunch of ignorant morons you all are, you have learnt nothing from the HIV fiasco promoted by the same criminal called Fauci that is now pushing further the fake agenda of a pandemic that never happened, but for any of you to understand this at least you should be aware of some health basics which clearly is not the case, just keep salivating over the shorts of a human being who is not buying any of this bullshit, good for him… Go, Kit!

He’s literally walking around outside with someone he lives with aka his wife. If he was in a crowded space standing around people for extended periods of time or insider I would agree with you. But he’s not. This is the type of low risk activity you should be doing without a mask. Actual public health doctors agree with this. They aren’t causing harm by walking outside unmasked. I say this as someone who worked in schools all year. We only had kids masked outside because they were in close corridors with the same people. These pictures are not those circumstances.

You need to get off your masking high horse with Kit. You’ve written multiple posts complaining about someone whose following health orders.

Sorry not to have a contribution to the mask discussion we are all enjoying so much but...I NEED to see his ass in these shorts. They couldn't get a photo from behind? Or at least in profile?

He’s entitled to his opinion. THIS IS LITERALLY HIS WEBSITE.

I'm old enough to have been vaccinated early. I live in a large complex in Midtown where most people were vaccinated as early as January. Masks are required to enter our building. Only 3 people in the elevator last week went to only four. I watch reputable news and read repuptable newspapters. I have evolved. I wear a mask on the subway and in stores in fact inside anywhere. This week for the first time in over a year I ate in a restaurant indoors. It was practically empty and I was with four friends who were vaccinated. I have a lanard and I drop my mask outside unless it is a very crowded area or where lots of people are lined up to buy something at a stand. This now is the new normal for me. I will wear a mask on a plane train and car if I happen to be with strangers. I will get my flu shot promptly this year. Everyone has their own level of risk. I would have trouble working in an office if I knew that my fellow workers were not vaccinated and I empathize greatly with our host. We are alas, a selfish, narcissitc, material nation. The hand writing is on the wall. Maybe we'll all wake up, maybe it's too late. I just try to protect myself and hope I won't injure anyone else. Like I said, the new normal.

To each his own but I'm from Singapore and wearing mask is a mandate of which I'm glad. Even if it's not a mandate, I will still wear a mask. Be mindful that unless the world is safe, no country is. There's the delta variant taking shape and it has hit Australia and parts of Asia hard so it's only a matter of time before it gets to the US...Europe, in particular Portugal and parts of Spain, has already seen a re-surge in cases due to this variant. So Jason is right to be guarded. I applaud his attitude. And for the rest, to each his own.

Happy for the robust convo happening in here, even if some of you are assholes :) I'll just say again -- getting vaccinated keeps you from dying, it does NOT keep you from catching COVID. So smart behaviors, while the illness is mutating and on the move -- still killing hundreds of Americans every single day, and the numbers going up! -- don't seem outlandish to me. I don't know what masks did to some of you people, apparently they snuck into your house and murdered your parents while they slept, but I don't mind my mask! It's fine! And even vaccinated I have no desire to get COVID. A friend of mine, vaccinated, was just very sick for two straight weeks. And there are long-haul symptoms nobody really understand yet. If I can just NOT GET COVID or NOT GIVE COVID TO PEOPLE I LOVE I am going to do everything I can to maintain that. Y'all do you but I will keep singing this same ol' song until this is actually over, which it ain't. If you don't wanna listen nobody's forcing you to listen to me.

Not to quibble, but "still killing hundreds of Americans every single day, and the numbers going up!" is untrue. As of Tuesday, this week, 7/6/2021, the daily death toll, which has been dropping precipitously since the beginning of May at least, is in the range of 165 a day. About 3 per state per day nationally. And at the current rate of decline, it should be down near zero by the end of the month.

Yeah I don't see us maintaining the current rate of decline. Positivity numbers are going up, hospitalizations and deaths will follow those. We are in no way going to be "near zero" near the end of the month

I live in Latin America where the pandemic is in full swing and nobody here is talking about taking off their masks. You're right Jason: as long as the virus is circulating, nobody is safe. We've been seeing this for over a year now and new variants will keep appearing as long as countries are infected. I understand Americans with their liberty and freedom and whatnot, but when it's hurting others we should draw the line.

Kill yourself, you ignorant piece of shit.

Vaccines protect against the Delta variant and outdoor transmission really isn't a thing. I hear your fear/anxiety but it's not rooted in reality.

I'll repeat. 1) I now know three people personally who were vaccinated and have caught COVID due to the Delta variant. 2) I do not consider NYC sidewalks to be "outdoors." We are piled on top of each other in this city and continuing to wear masks here, or anywhere where you are in close contact with other human beings for the extent of this pandemic, seems entirely reasonable to me. Clearly some of you disagree but you're wasting your time here. I'm paying as much attention to the science as anybody. Over caution is a feature, not a bug.