Hey, Medusa's Eyes Are Up There 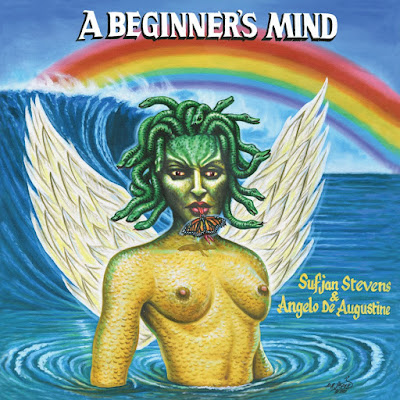 I've had a bit of a crazy morning -- a co-worker found out he had contact over the weekend with a person who tested positive for COVID, so he ran off to be tested while the rest of us sprayed Lysol over everything until we were choking (co-worker's fast-test already came back negative so... hopefully all's well, fingers crossed) -- and while all of this was going on a new Sufjan album was announced!!! So I had Lysol in one hand and quick bought myself a copy with the other. It's called A Beginner's Mind and here are Sufjan's own words on it via his Tumblr:

"I made an album with my friend Angelo De Augustine called A Beginner’s Mind—a collection of folk songs loosely based on films. We started this project together in upstate New York (before the pandemic) and then finished it remotely during Covid. The first new 7-inch single (“Reach Out,” above) is partly inspired by Wim Wenders’ Wings of Desire, and the lyric video features our respective dogs. The B-side (“Olympus”) is based on Clash of the Titans (the 1981 version, which includes Ray Harryhausen’s final stop-animation work). ... We will be releasing two more 7-inch singles over the next few months. More music (and movies) to come. I hope you enjoy. Peace to you. XOXOXO"

Sufjan says the single "Reach Out" is above but hey oh it's actually below, where I have shared it. I haven't even listened to it yet myself, since, you know, the plague or whatever. Enjoy!
Who? Jason Adams When? 10:21 AM
Labels: Sufjan Stevens