Bow Down to the Grand High Udo Kier 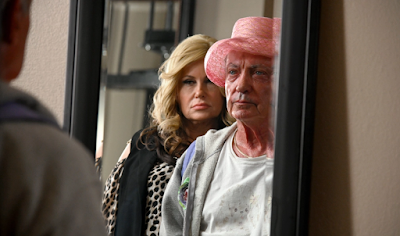 When you hear that a movie has the legendary weirdo Udo Kier -- and I hope you all know me well enough by now to know that "legendary weirdo' is about the highest honor I can bestow upon a person; weirdos are my version of religion -- playing a "flamboyantly gay hairdresser going on a small-town quest to style a dead woman's hair," and opposite Jennifer Coolidge no less, you get an idea in your mind right off the bat of the movie that will be, right? I know I did, because when I wrote about the movies I was most looking forward to at SXSW last week I listed Swan Song, Todd Stephens' new film that is about just that, I said as much, with a whole lot of exclamation points. It sounds like exclamation points!

So when I tell you that Swan Song ends up being less exclamation points than it does some softer, sweeter form of punctuation, like perhaps a double ellipsis, you'll understand that too, right? The only exclamation point turned out to be from how far off I was about the still weird but totally heartfelt sincerity of Swan Song. That's not to say it's not bonkers, in its way, but it's a quiet bonkers, a genuine bonkers -- it already has Udo Kier riding an electric scooter in lime-green 70s lounge-wear and enough rings to rattle a street-tough, and Stephens & Kier are smart enough to know nothing about that needs to be shoved too hard. Instead of aiming its jokes for the broad side of the barn Swan Song goes time and again for the gut, the heart, and it lands enough sweet soft blows to keep surprising.

When we first meet Pat Pitsenbarger (Kier) his fabulosity is precipitously tamped down, trapped in a old folk's home where he putters around in baggy gray sweats -- the only sign of life is the poodle on his white t-shirt but from most angles that poor dog manages to look more like a stain than any former splendor of self. Pat spends his days sneaking smokes, staring at the walls, and folding napkins -- so many napkins they've piled up in every drawer, on every shelf and closet, mad walls of sublimated creativity. This is clearly a former flamboyantly gay hairdresser in need of an intervention, a spark, a big gay insurrection. 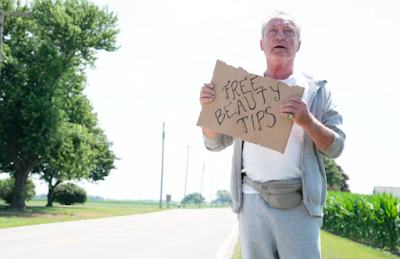 That's when a lawyer shows up, telling him his former big-fish small-barrel client Rita Parker Sloan (Linda freaking Evans!) has gone toe up, and she's dictated in her will that Pat and only Pat be allowed to see to her body's in-casket beautification. He's promised a pile of money in exchange for coming out of retirement but even with that Pat seems disinterested, even aggressive towards the lawyer; there's something about "making up" for some historical slight mentioned and it's clear the past between Pat and Rita is ensconced in barbed wire, harsh to the touch.

But once Pat is given the chance to stew in the storm this blast from the past has riled up in his belly it becomes clear there's no turning back; the box has been reopened, and the wigs are spilling out everywhere, far too many to fight back. And like the gayest version of David Lynch's The Straight Story imaginable we watch Udo Kier set off on foot across the cornfield-adjacent back-roads of middle-American nowhere to confront his strange past, picking up small semblances of his old self along the way until, by film's end, he's so spectacular he's literally shooting off sparks.

And what's so deeply, warmly impressive about Swan Song is the way it uses Pat's journey to openly confront one of the most insidious and formerly-nasty stereotypes of gay male "representation" on-screen -- the swishy queen hairdresser, the poodle-like sexless sidekick to his lady-friends, always ready with a bon-mot but with no self or personal life to speak of -- and flips the damn table right over, beauty products akimbo. It gives this thought-sexless accessory real history and depth, love and kindness and deep wounds, especially at the straight white women who've treated him like their pet and not an actual human being.

The relationships between Pat and Rita, and between Pat and his former employee turned betrayer Dee Dee (a way tamped down Jennifer Coolidge, who lets her bad hair do all the talking), are fraught with pain, all of which comes tumbling out over the course of this miniature Odyssey through public park tearooms and abandoned gay bars, all haunted by the ghosts of the life Pat's lost, left behind, and had snatched away in equal measure. Which is to say Swan Song, for all its Camp factor, mines genuine pathos, especially in Kier's tenderly low-key but dryly hysterical turn. Not even in my odder fantasies did I think I'd end up arguing that Udo Kier had been given the gift of an empathetic and moving role here this far into his career of wonderful oddballs with the movie about the flamboyantly gay hairdresser, but that only proves my own short sight. Swan Song gives this one-of-a-kind movie-king a crown jewel. 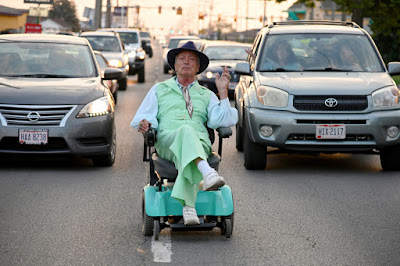 Swan Song is screening as part of SXSW right now.
(And PS it also just got picked up by Magnolia for release.)
Who? Jason Adams When? 2:50 PM
Labels: Jennifer Coolidge, reviews, SXSW, Udo Kier