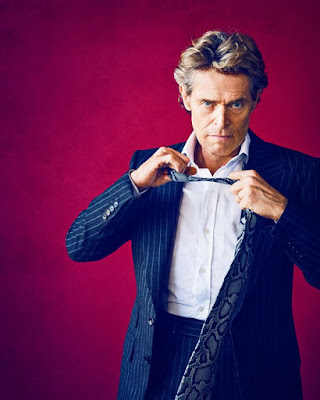 "It’s a huge movie. It’s a muscular movie. My involvement isn’t nearly as expansive as The Lighthouse. I’m in a supporting role, but it was thrilling. The level of research and detail is there, but on a much bigger scale. During the pandemic, they continued to work and to research things to build, and somehow they did. We gave them the time to prepare for this huge jump in budget and size of production. The sets are fantastic.”

IndieWire talked to Willem Dafoe today and got him to offer up a few little somethings on Robert Eggers' forthcoming Viking epic The Northman, which will be out in April of next year. (Sigh.) It's not as toe-curling a quote as we got from actor Ralph Ineson back in March (you know where he went on and on about Alexander Skarsgard's muscles) but 1) he does say more at the link (a hint of his character being "nefarious" sounds good) and 2) it is a good reminder that we just need to be excited about Dafoe re-teaming with Eggers after they went and made the best movie of 2019 together....

Ok, so Streets of Fire, 1984 is streaming on Netflix w/ a very young Dafoe. His skin is flawless.

I think the fixation of white boys on viking mithology weird; But ok, Robert Eggers is one of the best director out there. Of course i am ansious.

Man, he and Glenn Close continually get robbed by the Academy.