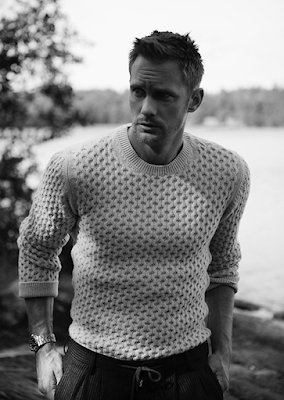 The human-special-effect known as Alexander Skarsgard has Godzilla vs Kong out here in the US next week -- and you'll definitely be hearing more from me on that subject soon -- but more importantly out later this year (presumably) is his leading turn in The Lighthouse director Robert Eggers' Viking epic called The Northman, about which we've been scouring the internet every second of every day for new tidbits of information don't you worry. That's how I came across a new interview with actor Ralph Ineson at NME -- he played the father in Eggers' film The VVitch, and he's got a role in The Northman too, and he had this thrilling update on that:

"It’s an enormous movie. I saw a four-minute montage of some of the stuff they’d already shot and I was really blown away. The marriage of Rob Eggers’ imagination and Viking folklore… Jesus, man. Alexander Skarsgård looks like an absolute beast. [There’s] a scene where he beats this guy in a battle; bends down and rips his throat out with his teeth, screams to the gods and he’s got his shirt off – and you think: ‘My god that’s not a bodybuilder doing a scene, that’s like a proper serious actor!’ He’s made himself look like some kind of monster for the part, the dedication’s incredible. I think it will be a bit of a masterpiece, to be honest. If I was to put bets on any film being an absolute banger, it would be that one.”

His description of the movie sounds horrible lol A guy rips out someone’s throw in a battle? Eww wtf. The world is so messed up that that’s considered to be, ooh it’s gonna be a masterpiece!