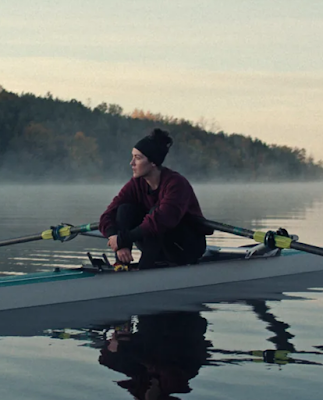 Whenever I think about the sport known as crew I think about this incredibly cute freshman I had a brief fling with in college -- it stands out because I have my entire life dated older men but he was about three or four years younger than me, and also he was just adorable. Floppy blond hair, rosy cheeks, almost as tall as me (I'm 6'3" so that doesn't happen a lot), and like I said he was in crew so he was in great shape. I've actually told the story here on the site before about the time he and I hooked up in the college's library where we both worked, one night when we were supposed to be closing up the place. Anyway those are fond memories and I bring them up because last night at The Film Experience I reviewed the sports film The Novice, which has Orphan actor and MNPP fave Isabelle Fuhrman, playing an obsessive rowing team freshman; the film played (and won some prizes at) Tribeca this past week. And talking about rowing made me get lost in my fond Penthouse memories of hot crew boys and dangerous library encounters...
Who? Jason Adams When? 11:09 AM
Labels: Isabelle Fuhrman, reviews, Tribeca