A Person Sat in a Theater Reflecting on Existence 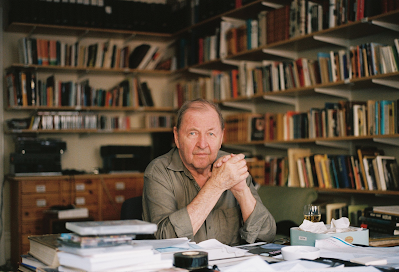 I'm still trying to gauge how comfortable I am going to movie theaters. I happily went to a movie last week (see below) but I also knew beforehand it'd be uncrowded -- am I ready to go see a movie with an actual crowd? I don't know if I am. I have a press screening next week which will probably have more of an audience so that will be a test. Anyway we're all working at our own pace -- I'm not pressuring anybody at this point to go or to not go. Everybody do what you feel's right for you... as long as you're kind and respectful and responsible of course.

Anyway that's my long lead-in to sharing the news that if you're here in NYC the great Film Forum has just announced that they're going to be screening Being a Human Person, the new documentary about one of my favorite filmmakers, Swedish Genius Roy Andersson, premiering there on July 2nd. The film watches Andersson while he works on his latest (and possibly final) masterpiece About Endlessness, which I reviewed back in April -- the thought of getting to see how Roy's sausages are made with those elaborate stagings and sets, is getting me positively giddy.

Film Forum will also be screening three of Andersson's other masterpieces -- and I hope you'll believe me when I say that every single film Roy Andersson has made is a masterpiece, because they reall and truly all are -- alongside the doc; they'll be showing Songs From the Second Floor, You the Living, and A Pigeon Sat on a Branch Reflecting on Existence; the only one of these that I have seen in the theater is the latter and if you've seen an Andersson film then you know they were built for that big-screen experience. This is an unmissable series, is what I am saying. Just like Charlie Kaufman at The Paris was! NYC is really forcing my hand with this whole "Let's go back to the movies!" thing...