Be Sad, At Home 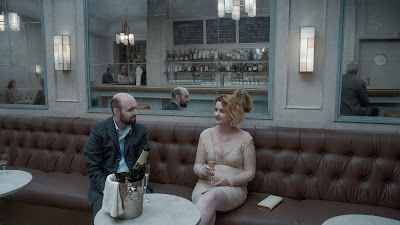 Everybody talks about life handing you lemons, but what about the potatoes and the tomatoes? Nobody ever speaks of those, so thank goodness we have the Swedish genius Roy Andersson here to give the full garden of round fruits its due. And he's doing it again with his new movie About Endlessness, which is out in theaters and on demand this very day today -- there are potatoes, there are tomatoes, there are fish markets and death bunkers and an existential depressive whimsy that will make you fully swoon. It sure is a Roy Andersson movie, it is.

If you've seen one of Andersson's previous three films -- Songs From the Second Floor in the year 2000, You the Living in the year 2007, and (winner of the greatest movie title of all time according to me) 2014's A Pigeon Sat on a Branch Contemplating Existence (and I really do recommend you see each and every one of these) -- then you should know what you're in for when I say "a Roy Andersson movie." About Endlessness is another 76 minutes of static mostly-disconnected vignettes in boxy scenes drained of color starring unremarkable potato-shaped people doing not a lot. A man ties his daughter's shoes in the rain. Some drunks stand in a bar in the afternoon and stare at the snow falling. 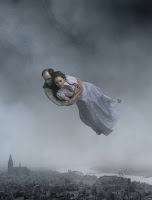 And yet, how. Every visit back to Andersson's strange little snow-globe world becomes something like what Phillip Seymour Hoffman's character was attempting to recreate in Charlie Kaufman's Synecdoche New York -- the piece representing the whole; the moment becoming all of life and its meaning. Distillations and essences and a long sip of champagne, quietly, with a half-smile. When Andersson speaks of potatoes and of tomatoes what he's spinning for us pigeons is existence, here and after, energy and atoms splitting, a goof on forever but forever all the same. The moment's it, baby.

And even if, unlike the colorful Chagall painting it references, this film's singular image of encoiled lovers flying in upper space do so above pale gray smoking ruins, About Endlessness somehow feels like a dare-I-say hopeful nudge from our beloved pessimist. About Endlessness has its drunks look at the snow and say, "Everything, everything, everything is fantastic," as Christmas music plays, and he really makes you think everything might be fantastic. If you too could just find a quiet place to stand and watch the snow fall, well, wouldn't it be?

About Endlessness, even more than its three predecessors (which found more time for politics, war, and comedy), concerns itself with sparkling little semi-hopeful gems, seconds and scenes, moments where his ever suspended time shimmers and shimmies up against magic. Three girls come upon a country cafe playing a song and everything stops as they dance to the song; we watch, the patrons watch, and at the end they and we clap for enlivening a moment that might've otherwise only slipped past forgotten. It's a parade of visions before one dies, really -- what are the things you will remember at the end? Andersson has a way of capturing them, turning them over in his hands, and gifting them back fresh, pure, perfect -- fantastic, fantastic, fantastic. 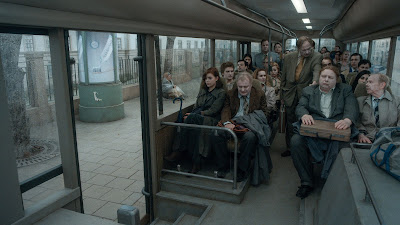