The Wonder of Florence Pugh 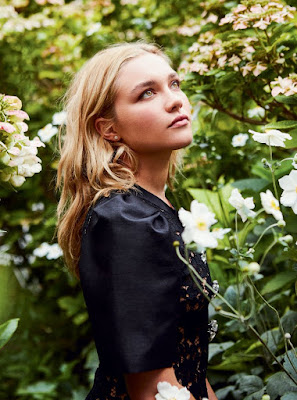 Florence Pugh has a face and a talent that I don't foresee myself getting tired of looking at any time soon, so I greet the news that she's hooking up -- work-wise, I mean -- with one of my favorite directors with much and I do mean much fanfare. Whoop whoop! (That's much fanfare. I even italicized!) Anyway Deadline reported this like a week ago but I'm a turd, just now getting around to it -- she's going to star in Sebastián Lelio's new movie! You should definitely know Lelio's name by now but if you need a refresher he's the genius fella behind Gloria, A Fantastic Woman, Disobedience, and Gloria's 2018 remake Gloria Bell with Julianne Moore. There ain't a stinker among that bunch -- indeed most of them were in my very favorite films of their years.

Now on to the movie they're making together. It's an adaptation of Emma Donoghue’s 2016 novel called The Wonder, a 19th century Irish thriller... well, I will let Deadline summarize it:

"The novel is set in Irish Midlands, 1859 and follows an English nurse, Lib Wright (Pugh), who is summoned to a tiny village to observe what some are claiming as a medical anomaly or a miracle – a girl said to have survived without food for months. Tourists have flocked to the cabin of eleven-year-old and a journalist has come down to cover the sensation. The Wonder is a tale of two strangers who transform each other’s lives, a psychological thriller, and a story of love pitted against evil."

That's kinda vague, but I prefer it that way -- better to let the movie surprise me. Similarly I won't go read the book, but if any of you have please tell me if all of this sounds like a good idea! I kind of hope they change the title -- there are too many movies with too similar a title to The Wonder already. I don't want to be forced to think about that bad Terrence Malick movie with Ben Affleck, god forbid, during this.

Sounds BAD but I like the people involved so I’ll stay positive.

I can't wait to see her as the new Black Widow in Marvel's upcoming Phase IV series and films.