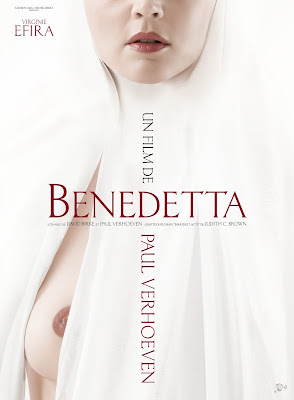 The very first thing I saw on Twitter this morning was that nipped-up poster there for Paul Verhoeven's erotic lesbian nun romp Benedetta, which tickled me... but not too much, because I'd already seen that poster awhile back. People were pretending it was new but that beauty ain't new; I remember giggling about it last year, even. But then I realized the poster (and the half-nip) was just a tease and the real show was, cue angel choirs, the trailer! As expected it was announced the film is playing Cannes and so they've gifted us with the first footage, and y'all...

Me watching that BENEDETTA trailer pic.twitter.com/8OvIOwfzDU

It's no big surprise that this movie's giving us The Devils vibes -- as much was expect the second it was first rumored. I posted first about this film at the beginning of 2018 when Charlotte Rampling was cast and when it was still called Blessed Virgin -- it's totally living up to the three years of hype based on the trailer right? Even if I did like the original title better. Watch:
This hits Cannes and the entire country of France on the same day, July 9th -- us poor American SOBs will have to wait until who knows. I knew I should've applied for press to Cannes this year. (Dare to dream.) Anyway I find it kind of funny that this trailer has dropped on the same day that my beloved favorite podcasters the Gaylords of Darkness are talking Ken Russell's The Devils -- there's horny nun juice spraying everywhere, yall!