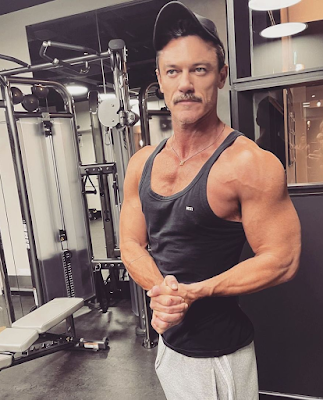 Luke Evans' mustache and bicep would like to remind you that the second season of their show The Alienist is hitting blu-ray today -- see my previous post about exactly this same thing, but written a couple of weeks ago, right here. I was going to ask if we thought the stache was for business or pleasure but IMDb says he is filming his role as "The Coachman" in Robert Zemeckis' upcoming live-action Pinocchio movie and I could see a stache going with that, couldn't you? I don't know why he'd have to be so shredded for a Pinocchio movie but my guess is that's the part that's for pleasure. Anyway I didn't even realize that Zemeckis was already filming this -- I'm sad we're not getting the Guillermo Del Toro version; he seemed better suited to the creepy material. Zemeckis will probably make it creepy for all the wrong reasons a la his Polar Express movie (which also starred Tom Hanks, who's playing Geppetto this time).
Who? Jason Adams When? 11:03 AM