Wild Beasts of the Fields Are Mine 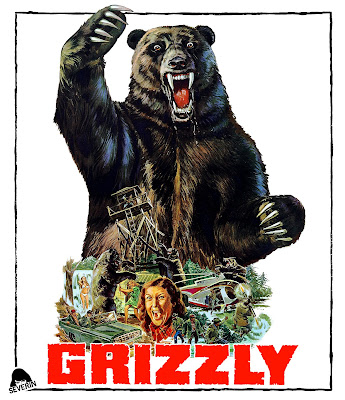 Funny enough the day before Severin announced they're releasing the 1976 Jaws rip-off Grizzly on fancy-schmancy blu-ray in May I watched a little bit of this movie over my boyfriend's shoulder -- he watches lots of wonderful things without me on his iPad while cooking dinner, but his howling coming from the kitchen over Grizzly was too much to ignore. Can you believe I've never actually seen Grizzly? I mean I've now seen a scene where a horse get its head knocked off and a scene where a bear explodes like a car that's fallen down a cliff, so I hope that's not the best the movie has to offer once I check out the aforementioned fancy-schmancy blu-ray on May 18th. That's the delightful cover art up top -- and that same day Severin is also releasing the 1977 sequel Day of the Animals, seen below, which I also also have not seen! Sometimes I think I have seen absolutely nothing in this life! All I do is watch movie after movie and yet I haven't seen these obvious classics??? I'll never catch up! Anyway if you hit the jump I'll share the trailers for these two discs, which'll give you a good idea of the When-Animals-Attack insanity ahead... 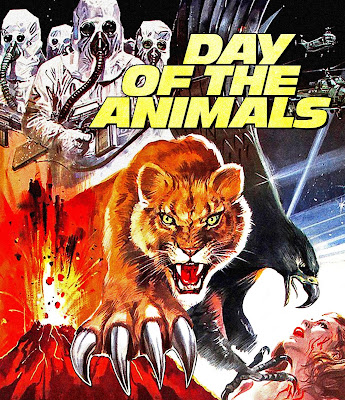 That's not the one sheet from "Grizzly" featuring "18 Feet of Towering Fury". Saw it in 1976 or 1977 (movies took a while to get to small towns in Michigan back when movies didn't open in wide release). You can view the poster on Imdb.com "Grizzly" is streaming free on ImdbTV, The Roku Channel and Hoopla and Amazon Prime according to JustWatch . The big news I discovered is that the legendary, troubled production of "Grizzly II: Revenge" is now streaming on Showtime! This film was supposed to be incomplete except for work prints since the disrupted production in Hungary in 1983. Starring Oscar winners George Clooney, Laura Dern and Louise Fletcher among others and a post "Valley Girl" Deborah Foreman. Double feature time!
"Day of the Animals" isn't a sequel to "Grizzly", they just have the same director.