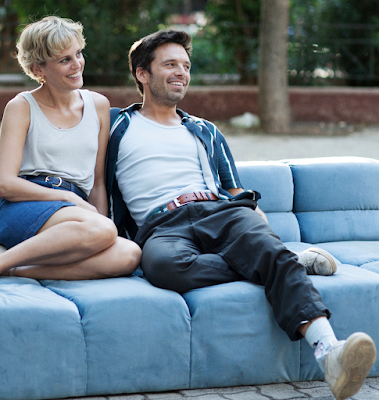 "I didn’t even care [about being naked]. The thing about the naked stuff is, right, sometimes you hear about movies having sex scenes or nudity or whatever and maybe that’s all people talk about. And for some reason if anybody does highlight only this once this movie comes out then that’s a shame because that’s just clickbait, which is what everybody is too lazy to admit they like to rely on nowadays. Like, “What’s going to get someone to read the article? Oh my God!” It’s like, “Give me a fucking break. Say an ounce of truth for once, you know?” But whatever.
And I guess we were trying to say some truth with this movie. What I’m saying is that nothing about it felt salacious or not earned. We always discussed [those scenes] and saw them from a place of “Yeah, in that situation that’s what would happen. They would be like that or they would be naked. They would end up in that way.” Argyris never shot those scenes in a way that [made us uncomfortable]. The nudity and the sex scenes were there to help bring depth to the film or help do some heavy lifting that was not being done by the performances or the story."

It only feels fair, since I keep calling Monday, Sebastian Stan's new movie, the "Sebastian Stan's Penis Movie," to highlight this quote from Stan's new interview with The Observer -- I never pretended I was doing anything but clickbait, but he's allowed to respond of course, and I don't disagree with him in the slightest. I just think that clickbait headlines can comfortably coexist with genuine content... or at least that's what I personally try to do. Guess I can't speak for everybody, for every shitty site out there. It feels goofy, and celebratory, and sex-positive. We've come a long way, where we can openly celebrate a superhero movie star's on-screen nudity, I think. And, I mean, Seb did just Instagram a photo of his butt today as advertising for the film. Whatever gets eyeballs on your damn movie! Sucker 'em in with peen and then go for the heart -- that's been my longtime M.O. anyway.
Who? Jason Adams When? 4:18 PM
Labels: gratuitous, Sebastian Stan