I Don't Know No Oscar 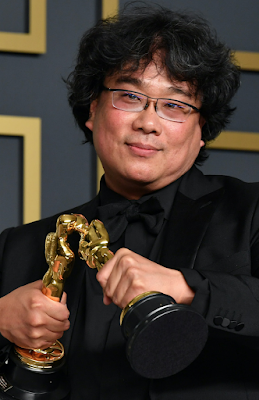 So... apparently... I don't know if you heard this... the Oscars are this weekend? I know I'm annoying enough about it that my stance probably seems like a pose I've adopted or whatever -- "I'm the cool guy who thinks awards are dumb, nyah!" -- but I really have paid less interest to the usual awards season antics this year than ever, and that's saying a lot. Because I am on "Film Twitter" I have some vague sense of what's nominated -- I could probably rattle off most of what's up for Best Picture if you held a gun to my head, but just because they're the movies I keep seeing the tweets about. I really have not looked at the list of nominees since the day they were announced and even then it was only cursory.

I think the Oscars are nonsense, but more than that I think they are actively harmful nonsense, for those of us who actually care about The Movies, in that they reduce our conversations about Film Art to statistics in the place of true meaningful discussion...

It's also (and this is QUITE THE LOSS for y'all) why I usually lose interest every year in writing about movies currently nominated -- the conversations aren't happening on the film's terms, they're too often about all this extraneous bullshit. I'll write about Nomadland in 2023!

... and they just suck every ounce of air and life out of the place. But I do still watch the dumb damn show every year, because I do love watching movie-stars put on fancy clothes and mingling with one another more than I do a lot of other things I could be doing. And this year specifically I am pretty excited to see what the show's producer, one Steven Soderbergh, has got up his sleeve -- he keeps talking about the production feeling cinematic, like a movie itself, and I have no idea what to expect but I do know that Steven Soderbergh is a bigger movie buff than all of us put together and the dude knows how to put glamour and celebrity on a pedestal when he wants to. I'm sold.

Just don't ask me who's nominated for what. But I'll be watching, and not knowing who's nominated going in will give me my own fun game of, "Oh shit, [that person] is nominated! Look at their poofy dress and/or poofy tuxedo! Oh what a night!" It won't be the same game all the awards punditry are playing, shuffling around percentages like bedazzled Rain Men, but it'll be it's own damn thing. So -- and wow, what a sell this has been! -- follow me on Twitter if you don't already, as I'll no doubt be live-tweeting the night in my own fashion. Or tell me in the comments of this post what you're rooting for, or rooting against, or neither, or both. Oh and have a great weekend! Maybe find some time to watch a piece of trash that never ever would've gotten nominated for shit, like Tammy and the T-Rex!

May I recommend Oscar Dearest: Six Decades of Scandal, Politics, and Greed Behind Hollywood's Academy Awards, 1927-1986 by Jim Pinkston and Peter Harry Brown. It's one of the most eye opening books on movies I've ever read. For one thing, the fairy tale about the Oscars created by Chaplin, Pickford, Fairbanks, etc. is just that, a fairy tale. In truth, it was created by the studio bosses to break up the Screen Actors Guild, thus, a union buster. The awards in the early years were essentially bought by the studio bosses. The list of people who never won, have never been nominated, or were hauled out for a "life achievement award," is sinful, but of all the sins of the Academy, the Blacklisting is by far the worse! The way they left out their support for people like Dalton Trumbo is criminal negligence! Well worth reading!

Oh that book sounds amazing, Pierce -- thanks for the heads-up! I will one hundred percent read that.

I tried to watch all the nominees but who the fuck in their right mind would actually want to watch The Trial of the Chicago 7??? I started it last night and couldn’t even get through 20 minutes of that bore fest. I turned it off and watched an Andrea Arnold film.

On a positive note: I'd seen people talking online about how good Quo Vadis, Aida? is, so I checked it out (on Hulu). It's amazing and an honest-to-god must see. Have you seen it yet?

Anon -- I actually have not seen Quo Vadis, Aida? yet, and thank you for the reminder -- people have been so effusive about it I gotta get on it.

Also Trial of Chicago 7 really is trash, and the perfect encapsulation of how the Oscars spend most of their time jerking off bad bad movies as long as the check the right boxes

When I was in my teens and really getting into watching all kinds of movies, I used to watch the Oscars every year. Then I got older and I just couldn't stand how the whole thing came across. I don't need Hollywood to tell me what films I should feel are great.
I own Tammy and The T-Rex and it is amazing.

The Oscars are shit but I still love them. I understand the complaints but I’ve been watching them since I was a kid and I still enjoy watching them today. Like Moonlight and Parasite wins recently make it worthwhile for me.

Gotta disagree on 'Chicago 7', it was a great movie to watch w/ my mom, she was alive then and said to me, 'I must not have been paying attention,'. In her defense, she was pregnant and in a bad marriage, so she had other things on her mind.
I always watch the Oscars, it should be interesting tonight. I mean, Soderburg is in charge.
I had a hard time watching Nomadland and Minari. I think they would play better in a theatre. My post-covid attention span is shot.
I've seen everything nominated. The only one I watched 2x was Promising Young Woman.

Everything that was off about Chicago 7 was done way better in Small Axe: Mangrove. Chi 7 was depersonalized and broadened like a Cliff Notes reading. Mangrove was deeply personalized and finely detailed. You felt the achievement at the end. I enjoyed the oscars last night, though, I have ambivalence towards them for the same reasons.

WORD to everything you just said, Shawny -- I know there was confusion over where Small Axe fits but I consider each it a film (either individually or as a whole, doesn't matter) and it was better than every single thing nominated; I hadn't even thought of Chicago 7 in contrast to it but the difference couldn't be starker.

I haven't watched the Oscars since Return of the King was up for Best Picture, and honestly, I don't think anything else could get me to tune in.