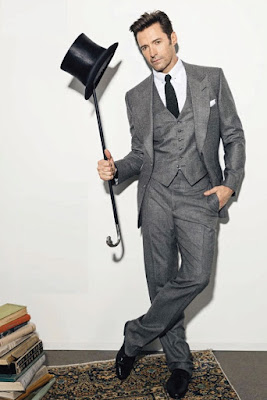 I don't know if y'all clocked it but my Hugh Jackman posting here on the site dropped off rather precipitously around the time he defended his friendship with Ivanka Trump -- weird, right? How those two totally unrelated events seemed to overlap? Anyway there's Hugh news today that compels me to post about him, so here we are. We'll see how it goes. The news is thus: The Father director Florian Zeller has lined up the cast for The Son, his follow-up to The Father which currently (and rightly) nominated for a bunch of Oscars, and it will be led by Mr. Jackman and Laura Dern. I should've just posted a photo of Laura -- she'll never do me wrong. I guess that Zeller once wrote an entire trilogy of stage plays, titled The Father, The Son, and The Mother, and this will mark the middle point in turning them into movies. Here's how The Son's plot is described:

"While The Father explored the devastating emotional impact of dementia, The Son will focus its lens on adolescent depression. The story follows Peter (Jackman) as his busy life with new partner Emma and their baby is thrown into disarray when his ex-wife Kate (Dern) turns up with their troubled and angry teenage son, Nicholas. Peter strives to be a better father, searching to help his son with intimate and instinctive moments of family happiness — to solve, with understanding, what Nicholas is going through. But the weight of Nicholas’ condition sets the family on a dangerous course, and they must do everything they can to maintain the bonds that hold them together."

Same here about Hugh. I can’t look at him the same way.

Oh my god. Hugh is friends with someone of a different political persuasion? Good grief. How will we cope? Isn’t the whole point of life only to interact with people with whom we agree 100% about everything? I mean, we have nothing left to learn from others’ differing opinions, we know it all, right? How dare you even mention his name again.

Ivanka Trump is not just "someone of a different political persuasion." She was the main cheerleader for a white supremacist driving the country into the ground, you fucking fuck.