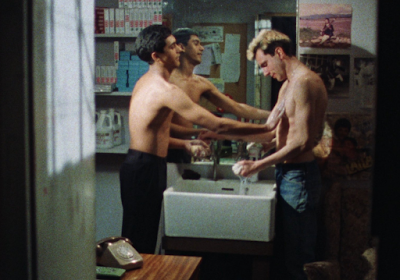 Today we wish the great Daniel Day-Lewis a happy 64th birthday! It always surprises me that he's basically my Mom's age but I suppose it shouldn't -- he's been making movies for awhile, after all. I was trying this morning to figure out when I became aware of him -- it had to be The Last of the Mohicans I suppose, although I might've already been watching the Oscars in 1990 when everybody went nuts for his work in My Left Foot. Sidenote: I have never, still not to this day, seen My Left Foot. I guess I probably should? Has anyone seen it lately -- does it hold up? Anyway our pictures today are of course from our beloved My Beautiful Laundrette, which came before all of those films but which I didn't see until much, much later. If I was gonna do a Top 5 of his performances though I'd have a hard time leaving "Johnny" off -- it's such an atypical turn for him, sweet and low-key. You'll never convince me that DDL is overrated as an actor -- he's our best, really and truly.

After Johny in Laundrette he was unrecognizable in his next film as Cecill Vyse in A Room With A View.

The New York Film Critics had the prescience to name him Best Supporting Actor that year, before later naming him Best Actor four times.

You write as though DDL is currently still an actor, but he retired four years ago. And I did believe him when he said "permanently".

NOOO I wont hear it! I had actually entirely blocked it out that he'd said that. And it will magically vanish from my brain by tomorrow, because I refuse to believe it.

Like you I am ever hopeful that he didn't mean it when he announced his retirement especially since I would hate to think Phantom Thread, a movie I really, really didn't like, is his swan song.

My first exposure to him was A Room to a View so I was flummoxed when I saw him in My Left Foot and then Last of the Mohicans and realized he was capable of so much variety. I've seen just about all of his work now (a regrettably small group), I still have The Ballad of Jack and Rose to see. I agree he is the best of the best.

1. The Last of the Mohicans-I know it's not his greatest performance but holy jeeps he's arresting in it, he and Madeline Stowe have the kind of chemistry you can't manufacture and he's hotter than a stick.

2. Lincoln
3. My Beautiful Launderette
4. A Room with a View
5. In the Name of the Father

He's mesmerizing in My Left Foot and Brenda Fricker is great as his mother but it's a hard film to get into because Christy Brown, while an admirable and determined man, was also a difficult and not particularly likable one making it hard to get deeply into his story. At least for me.

My Beautiful Laundrette is the only performance of his I really like. I usually find him too loud and cartoonish.

I really, really want to believe he's our best but I can't until I see him do comedy. I'm not convinced he could pull it off.