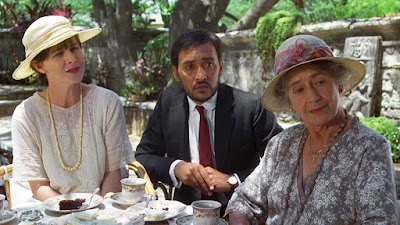 Adela: I do so hate mysteries.
Richard: We English do.
Mrs. Moore: I rather like mysteries
- but I rather dislike muddles.
Richard: A mystery is only a
high-sounding term for a muddle.

I was all ready to say that this is one of the remaining Merchant-Ivory films that I have never seen, and then I noticed that Merchant-Ivory had absolutely fuck-all to do with this movie -- it's a David Lean picture. Huh! Okay. So it's one of the David Lean movies I have never seen then. Is it any good? I'd be more inclined to want to see it if it was still a Merchant-Ivory film like it was inside my dumb head five minutes ago -- Ismail Merchant & writer Ruth Prawer Jhabvala probably would've finessed the colonialist and imperialist aspects of this story better than I picture Lean doing? (How is Forster's book seen now anyway? I haven't read it since college.) I could be talking out of my ass though -- it certainly wouldn't be the first time for that! Anyway, my point is, a very happy birthday to Judy Davis! 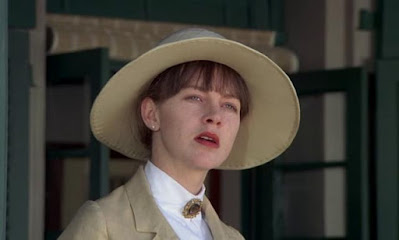 It's a wonderful film, and Davis is fantastic.

This is one of my favorite films of all time. I can watch it any time, anywhere. I saw it in the theater when it came out as a kid and fell in love with it instantly.

I never got through the book. Stopped half way and didn’t pick it back up. It is very different from the film though.

Just watched it for the first time in many years on TCM's 31 Days of Oscar. It's beautifully shot and produced. Like "Lawrence" really deserves to be seen on a big screen. Some great performances - Peggy Ashcroft in particular. But it is very difficult to watch Alec Guinness perform in brownface. I read that they knew it at the time, too - but British Actor's Equity made it almost impossible to cast a non-Brit. Lean was almost replaced as Director over his insistence on casting India-born Victor Banerjee.

Yep, nowadays Alec Guinness’ casting is incredible but the rest of the cast (Ashcroft, Davi, Banerjee, James Fox and Roshan Seth in a small role) is superb and it must have spectacular watched in a Big Screen. I agree, this should have been a wonderful project for Merchant-Ivory, but also the great Satyajit Ray tried to make a film based upon Forster’s novel but without fortune