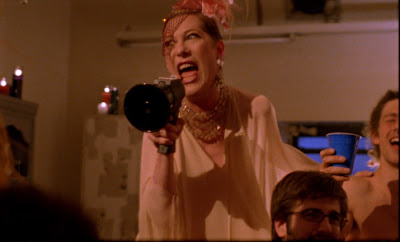 Justin Bond: These bitches sucking cock and eating ass...
then they show up at the buffet and say they're vegan.

A very happy birthday to John Cameron Mitchell today! I have to believe that y'all saw the news from earlier this week that the actor-director-Hedwig been cast to play "Joe Exotic" in the Tiger King miniseries... ever since that news broke (my brain) I have been trying to think of a way to post about it and... brain, broken. What the fuck does one even say to that headline?  It's so genius and so unexpected that it validates the entire project. I mean I love me some Kate McKinnon with all my being but she was in Bombshell, her presence doesn't immediately signal "I will move the sun and stars to get at this thing." John Cameron Mitchell playing Joe Exotic shoots a fuckin' rocket through every moon and star there is, laying a glittering path straight to paradise. I have seen the light, and it has a stringy bleached-out mullet.

A Tiger Kind miniseries sounds God awful. Who exactly asked for this?

I feel like public interest in this sordid saga has waned. I know I have no interest in it. Leave this story on the trash heap of history.

I have no interest. He murdered tigers and hide the bodies. he gave drugs to young impressionable boys just to have sex with him. And yet people want him released from prison. Make this story go away please.

Shortbus had some crazy nudity in it. It was such a departure for him from Hedwig, which is a classic now. I saw Darren Criss in Hedwig before he left the role and I loved it. He was so awesome. I really wish I would have been able to see it when JCM was Hedwig before Broadway in all the grittiness...and to get splashed with busted tomatoes. Oh well!