One Son Had Father, Ibrahim 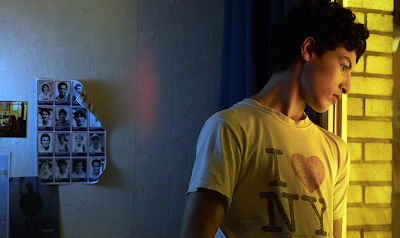 There's a moment in director Samir Guesmi's film Ibrahim (available on Thursday to rent as part of the ongoing "Rendezvous With French Cinema" series at FLC) where our main character Ibrahim (a very good Abdel Bendaher) comes face-to-face with the humiliation of poverty that rang so true to me and my own childhood experience I, like Ibrahim, sobbed. Ibrahim's charismatic bad-apple best-friend Achille (Rabah Naït Oufella, from Raw and Nocturama) has talked him into some petty larceny, as a lark. But Ibrahim's dreadfully bad at it (it's sort of a recurring joke) and gets caught, and the store-cop phones Ibrahim's hard-working father at his job to come get his son.

Bendaher is gangbusters in the moment, mixing horror and the shame of embarrassment up as his already paltry resolve crumbles, turning from 17-years-old into a little boy right before us. But this isn't even the worst part -- the worst comes a scene later, when Ibrahim realizes his stunt's cost his father's his small-dream of getting his missing teeth fixed. The moments when you finally realize the sacrifices your parents have had to make, the humiliations they have had to suffer so maybe, just maybe you their child can have a life just slightly less awful, those ones tend to sting the deepest, and Guesmi captures that feeling in excruciating detail.

I cringe when I remember certain scenes like this from my own life now -- the tantrums I threw as my mother counted food-stamps in the checkout line, my god. And like Ibrahim petty-theft momentarily seemed the fix-it-upper way out of this poor place. I once sat in a store-detective's chair myself, waiting for my mother to come get me. Point being this film felt personal -- unlike a lot of the films that revel in "Poverty Porn" Guesmi's film isn't exploitative, and really gets it. The eensy little degradations every day heaps upon you until your head seethes and you don't know what to do, where to go, what's even right anymore.

In less than ninety-minutes Ibrahim-the-movie captures so much of the spirit of that pivotal moment, the one in Ibrahim-the-character's life where an on-the-cusp-of-manhood young man thrashes around desperate for the footing unto where the good path goes. Guesmi's crafted here a deeply heartfelt take on how wild and dangerous those moments can be. And film has real compassion for its side characters too -- Achille, who invites his friend one night to meet the older man whose been funding his python-jacketed lifestyle, might stand in for the path better-not-chosen, but Guesmi gives him a moving and humanizing speech about their place in the world. Ibrahim has empathy aplenty. 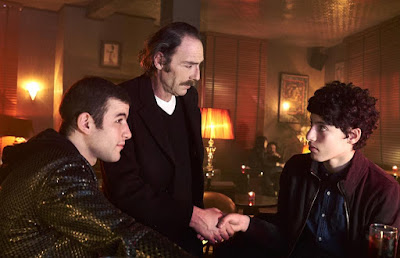 Not to reduce the film (or your characteristically sensitive review) to an actor's looks, but...

I don't read French well enough to tell what's going on in this video, but he appears at around 20 seconds and again at 3:15. https://www.telerama.fr/ecrans/les-revelations-2021-des-cesar-le-clip-de-yolande-zauberman-qui-nous-met-en-joie-6813399.php

Holy hell, he grew up! And out!

So I googled him after reading your review and before watching the trailer and yes, wow, did not realize how much younger he looks in the film! Definitely looks like a kid, NOT beefcake. Still looking forward to seeing it.

Now Rabah on the other hand...

Yes we've posted about Rabah before, we are fans