On Stage Everybody Can Hear You Scream 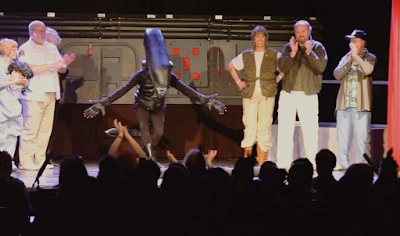 I don't think it's possible to write a review of the joyously lo-fi SXSW doc Alien on Stage without name-dropping Christopher Guest's classic 1996 comedy Waiting For Guffman, and that's okay -- if you're gonna be in forced company you might as well do it with a classic. Alien on Stage is exactly what the title tells you it's gonna be -- it tells the story of a bunch of people transferring Ridley Scott's 1979 film, yes the one with Ripley and the face-huggers, to the stage. In this case the people are a bunch of small-town British bus drivers who randomly decide that instead of doing their usual goofy amateur holiday version of Robin Hood they'll tackle something slightly (and by slightly I mean ten thousand times) more ambitious.

They don't seem to realize how much more ambitious this'll end up being though, not until they're in the middle of the ridiculous thing with walls of props and alien costumes and fishing-line chest-bursters popping through blood-pacs, but they're all having fun with it at least... until nobody shows up. Their show is a flop. They all seem prepared and resigned to move on... but then two big city folks (Lucy Harvey and Danielle Kummer, the co-directors of the documentary actually) suggest they try putting on the show for one night in London, which they manage to get set up, and before you know it the whole crew's packed up their detachable heads and taken the double-decker bus to the big time.

There's no false drama here, no nastiness -- these people all seem to dig each other, enjoy one another's company, and think it's a true pip coming up with ways to channel a genuine horror classic through their plastic-tube and styrofoam aesthetic; everybody's having a blast and that feeling transfers right to you, the viewer. Nerves of course start wheedling their way in the closer the big night gets -- did somebody say that they are opening up for Joan Collins??? Oh my lord! -- but the gang's all there for one another every step of the way, and since everybody's got their bus driver routine to get back to this is not do-or-die for anybody; they wanna have fun and put on a fun show, and do they ever. I was crying tears of joy at the end of this thing, just from the sheer exuberance of it all. Good show, standing ovations for all! 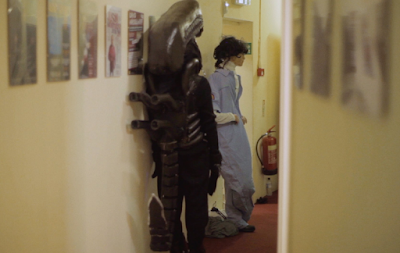 Can't possibly be better than the Bob's Burgers version.

A New Jersey high school did a stage version back in 2019, and I believe they've done encore performances since then. https://www.dailymail.co.uk/femail/article-6848813/New-Jersey-schools-play-version-Alien-goes-viral-incredible-recycled-costumes-set-design.html