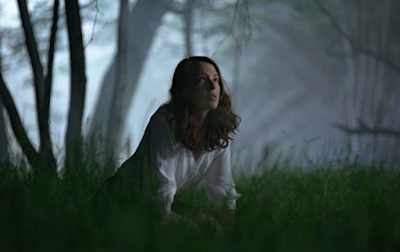 Two weeks on I still feel this movie like moss between my fingers. You can smell the damp of it hanging in the room, like death just left. Premiering last week at SXSW Lee Haven Jones's big-screen directorial-debut The Feast does by Folk Horror right, introducing a small clean slice of society and then slowly letting the insects in, to swarm up from toe to ankle to heel to heart. You'll be a disarray of bones left behind in its wake. It's an icy fable of class putrefaction, skin grafted on stone.

A rich couple called Glenda (Nia Roberts) and Gwyn (Julian Lewis Jones) in for a bit from the city are preparing for a big dinner night at their sleek expensive country-home, a modernist pile of slate and wooden blocks dropped in the middle of Welsh no-place. Foggy forests on all sides, it's a monument to nothing, reflecting only its self and its insides back -- winding moats of gravel complete the austere castle sensation. The house is aggressively other, a sanctuary for otherness, a stab at the heart of surrounding nature. Self-sustaining citadel, it doesn't want or need to fit in. Neither do the couple's two mostly-grown weirdo sons, who both aerate petulant serial-killer vibes from their icy pale skins and faces, giving off a princely mist of "we're far too refined to fit in here." There's the heroin-chic Guto (Steffan Cennydd), who stomps around a bitter pill, angry at everything, and the far more dangerous-seeming Gweirydd (Siôn Alun Davies), who seems to spend all his time standing in front of a mirror caressing his obsessively hairless self. To say this family's whole thing seems vaguely unnatural is to mistake hints of human flesh for formica -- they are plainly all wrong; turbulently queer in unsettling, unspeakable ways, ones which only grow more so the longer we watch them.

And then into their midst on this most important day arrives Cadi (Annes Elwy), a meek and plain-looking little foot-soldier from the local pub in town, wearing askew waitress clothes and come to give the mistress of the house a little assistance. And Cadi, one by one, begins to pluck at the family's peculiar, particular strings, set to play this horror tune out to its quivering body-pulp of a conclusion. And we, kings of the manor, sit back in sated splendor, snuffling its corpulent fumes. Ahhhhh, we say, a most fine vintage.

Which is to say I loved the heck out of The Feast, an unsettling and hypnotic little parable about the haves and the have-nots and what one will do to the other and the other right back to have what they had, want, and rightly or un-rightly demand. It's brim with weirdos and secrets bubbling up from beneath the black surface and the diseases of cordoned-off eccentricities left to rot and fester in their own heady stew, delicious au jus, a trail of sod dark as chocolate sauce and bone marrow smeared across the imported pricey flooring. New things might have sharp edges but they're nothing compared to the old thorny ways. 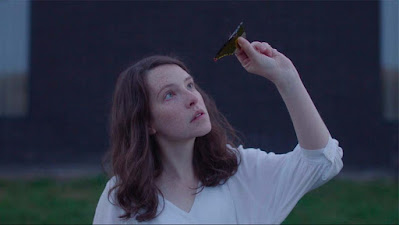