Commendable for trying something new for sure, the seventh (wtf how) film in the Wrong Turn franchise is a hard reboot like throwing your Nintendo down the stairs when it started skipping was a hard reboot -- seems they listened to the criticisms about the expired stereotypes of Inbred Redneck Southerners, bless their hearts, and so you won't see a single toothless Bubba abouts. I don't know if that's a spoiler, or better yet I don't care if it is, because that's the only damn reason I watched this movie -- I only know I saw the second Wrong Turn because I see that I posted about it back in 2008, and otherwise I sat out the majority this franchise. Wasn't anything I clamored for.

But a movie about young (hot) (gay) people taking a mysterious wrong turn in the woods well those I always have time for, so we come to me watching the new Wrong Turn. It's okay? I mean it's goofy without meaning to be, its reach exceeds its grasp, but I'm kind of tickled that we're getting Ari Aster rip-offs in 2021. That (forgive me for using this term) the "Elevated Horror" boom of the past several years has now trickled down to the, you know, less elevated places. It's like Meryl Streep's cerulean speech in The Devil Wears Prada, but with skulls getting caved in in the place of expensive belts. Maybe you'll be pleasantly surprised. 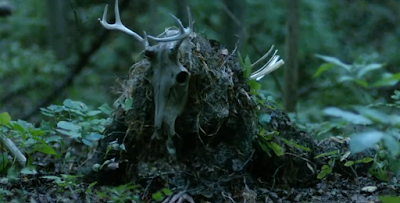 You should watch the first one. It was really good.

The original Wrong Turn was great, I remember it well. Eliza Dushku was such a babe in it! 🤍The movies that followed it sucked, I think. Literally don't remember anything about them. And I've watched at least one or two. This new addition is nice, though. 🙂

Watched it back when it came out. Think they did it well set in the modern world. It's a spin to the original story, I like how they dealt with it. And the ending was solid, too. 👍🏻 People are moaning online about how it's nothing like the Wrong Turn movies.

Sorry if it wasn't clear -- I've seen the first two films. I stopped after 2, is what I meant. The first one is perfectly solid from what I remember -- I haven't seen it since around the time it came out; I think I saw it more than once though.

Ok, I checked it out as you are a great source for my kind of scares . . . But c'mon (no spoiler) but the biggest twist happens during the end credits???