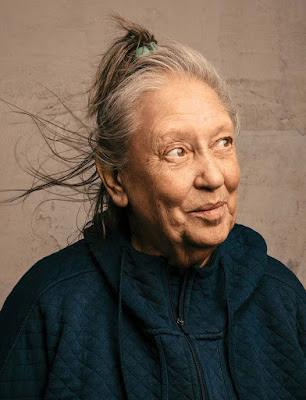 I feel ridiculous but I am literally a blubbering mess after reading The Hollywood Reporter's new interview with the legend Shelley Duvall this morning -- if you've been keeping track Duvall, one of the greatest actresses ever put on the movie screen, disappeared off the face of the earth for awhile, until [he who shall not be named] put her on his Fake Doctor Program and exploited her mental state for ratings. All I've wanted is for her to be happy, and so seeing the photos attached to the article, and listening to her talk with fondness towards her career (with none of the exploitative factor from that earlier interview), well it's totally overwhelmed me. For all of the yammering on that I do about celebrities every day there are only a handful that I hold close and dear to my heart and Shelley's always been one, since I watched her Faerie Tale Theater and Popeye as a little kid, and then graduated on up to her world-class performances in Altman's films and The Shining.

I profoundly recommend reading the piece -- it's wonderful -- but it's on the latter film that I quote her today in particular, because a narrative has formed (one I've participated in, far and wide) that it was Stanley Kubrick's insane, demanding and cruel treatment of her on the set of The Shining that drove her over the edge, mentally-speaking, but Duvall, in this piece only has nice things to say about him. Let's let her speak:

Duvall says, "[Kubrick] doesn't print anything until at least the 35th take. Thirty-five takes, running and crying and carrying a little boy, it gets hard. And full performance from the first rehearsal. That's difficult." Before a scene, she would put on a Sony Walkman and "listen to sad songs. Or you just think about something very sad in your life or how much you miss your family or friends. But after a while, your body rebels. It says: 'Stop doing this to me. I don't want to cry every day.' And sometimes just that thought alone would make me cry. To wake up on a Monday morning, so early, and realize that you had to cry all day because it was scheduled — I would just start crying. I'd be like, 'Oh no, I can't, I can't.' And yet I did it. I don't know how I did it. Jack said that to me, too. He said, 'I don't know how you do it.' "
Asked whether she felt Kubrick had been unusually cruel or abusive to her in order to elicit her performance, as has been written, Duvall replies: "He's got that streak in him. He definitely has that. But I think mostly because people have been that way to him at some time in the past. His first two films were Killer's Kiss and The Killing." I pressed her on what she meant by that: Was Kubrick more Jack Torrance than Dick Hallorann, the kindly chef played by Scatman Crothers? "No. He was very warm and friendly to me," she says. "He spent a lot of time with Jack and me. He just wanted to sit down and talk for hours while the crew waited. And the crew would say, 'Stanley, we have about 60 people waiting.' But it was very important work."

All these men are assholes. Shelley is a queen.

If you haven’t seen her in Brewster McCloud, you just have to. The movie is quirky and not a great Altman film. But her tour guide is fucking hysterical, and way ahead of her time I terms of her approach.