It Don't Matter If You're Black or White 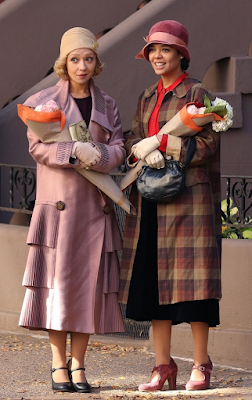 Well that's just great, now I'm going to have that Michael Jackson song stuck in my head all day. Remember the video with Macauley Culkin and Norm from Cheers and all the face-morphing? What a time to be alive. Anyway! I hadn't seen the paparazzi photos taken in November 2019 of Tessa Thompson and Ruth Negga shooting Rebecca Hall's film Passing here in NYC but I find them fascinating to look at now that I have seen the film, which was shot in beautiful black-and-white. You don't expect those pops of color in their clothes, but then they were most definitely chosen for the way they read on black-and-white film, as seen in a proper still from the movie down below. getting to my point I reviewed the movie, which just premiered at Sundance this week, for The Film Experience, and you can click on over and read my thoughts this very morning if you like. Let's just say I liked it. A whole lot. Oh and in bonus news Netflix just plopped down a pile of money for the film, so I have a feeling it'll be pushed for awards next time around, which thrills me. 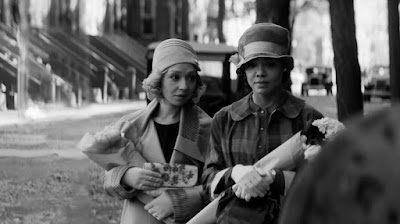