Receive Me Brother, With Your Faithless Kiss 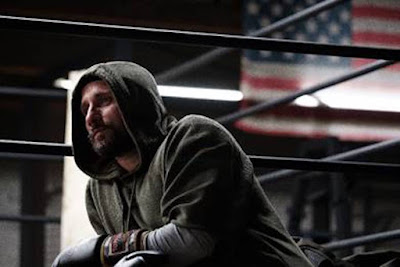 A note to everybody in the business of casting and making movies -- hire Matthias Schoenaerts. His specific mixture of sweet, sad, and bulkily intimidating always brings a heap of bang for its buck, to my eye -- I have yet to see a movie that wasn't made a little to a lot better just by Matthias being in it. (Okay maybe A Little Chaos, but that was one hundred percent that terrible wig's fault.) And so it goes for Brothers By Blood,(formerly titled The Sound of Philadelphia), director Jérémie Guez's languorous dissection of crime-family dynamics, set to strike VOD and some theaters this week. (Watch the trailer here.) A textbook case in "Hire Matthias Schoenaerts" if ever there was.

Schoenaerts plays Peter, another one of the introspective boxer-types that he could play in his sleep at this point. But Matthias, bless his bulk, never sleeps, even when he's called on again to be oh-so world-weary -- he remains keenly watchable even at his most somnambulistic, monosyllabic; he resonates like a quiet little bull in the corner of the china-shop standing on its tippy-toes trying so hard to not smash the world. By now Matthias can virtuoso out the tension of that un-smashing -- he's forever the lean-back to a punch, one that doesn't always come. One that might morph into a hug, a big bear one, given the correct alignment of hugging circumstances. 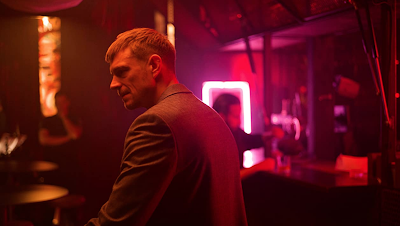 Peter specifically seems to just want to box and blend into the Philadelphia night shadows, but he's unfortunately for him cousins with an erratic and mildly-deranged small-time crime-boss Michael (Joel Kinnaman, hobbling and viper-eyed), who exploits Peter's meat-packing presence to his constant advantage. When the menu calls for intimidation, Michael calls up Peter to his side. Kinnaman, leaning on a cane, somehow inverts his own hulking presence, seeming more like a rat blown up to human-size; scraggly and feral under baggy person clothes. He limps in all the senses.

But besides their violent business relationship Peter and Michael are more than just cousins -- when the movie starts they do seem like friends, semi-confidantes, and at that maybe even the brothers of blood referenced in the title; that final note even moreso as the film metes out their family story in scattered flashback. The boys' crime-history, sordid and sad, becomes their crime-present with overlapping lines of betrayal, all tied and twisted into a crime-future of who knows. No good though. That's for certain in these sorts of stories. Hugs be damned.

Meanwhile there's also Paul Schneider playing their in-over-his-head old friend, and Maika Monroe as his sister visiting town who quickly becomes The Girl caught in between the cousin-brothers. And in flashback we have a whiskey-faced Ryan Phillippe playing Peter's father, distraught with grief and plotting stupid revenge that will probably cause the whole house, multiple houses even, to crumble. Every past has its moments, some more than most.

But side-characters aside it's mainly the Schoenaerts & Kinnaman Show. And while Brothers By Blood might not be something I've never seen before -- even if Guez does have a great eye for wet city shadows and sad plastered walls, giving this place the sort of dilapidated sense you can smell -- those two actors do manage to make something often worth watching out of some pretty familiar scraps. Are they totally believable as Irish-Americans? That, my friends, is a stretch best forgetting. But they're both immensely watchable all the same, and Schoenaerts in particular, man, the dude just bear-hugs out wonders time and again with whatever you hand him. He fills the screen on his own.

Jesus Christ, is this the only sub genre for brothers in film? How many fucking times is this story going to play out in dingy seedy boxing rings?

Can’t they be drag queen brothers for a change?