It Wants Your Pain 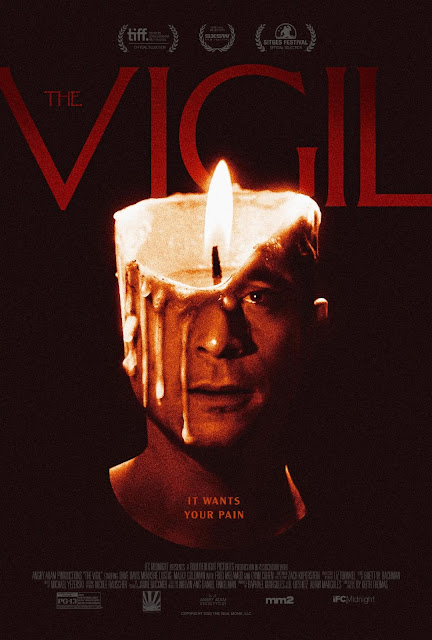 That there is the brand new poster but we've still got six-ish whole weeks until The Vigil is out on February 26th -- I shared the trailer with you in December; this is a very good horror movie, and you should be looking forward to it. It stars the very handsome not to mention alliterative Dave Davis (seen in the poster there with a candle for a head -- how weird would that be? "Oh they just turned my head into a candle. Now whenever anyone thinks of this movie the iconic image will be of a head as a candle. Cool.") as a lapsed Orthodox man who does an old friend a favor by playing "shomer" for a night, meaning he'll sit watch over a corpse until morning when they get to all their exhaustive washing and burial duties. 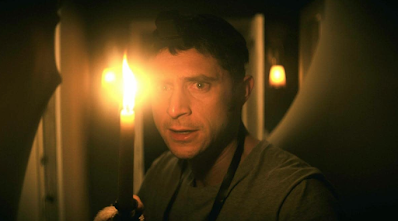 Religion, man! It takes up so much time. Sometimes I think people are religious just because they're bored and they don't know what else to do with their hours. Who the hell has time for religion in 2020? I have entire seasons of television to watch, man. But I digress. This movie scared me a lot! Even though I am not, in case that digression we just experienced didn't make it clear, religious, this movie still freaked me out. You don't need to be scared of imaginary lakes of fire or the eternal damnation of a made-up thing called a soul to still be scared of a weird shadow in the other room that seems to be creeping around, ya know? Yadda yadda I'll review this in February -- for now just mark February 26th as "Hot Sexy Scary Vigil Day" in your calendars.
Who? Jason Adams When? 11:56 AM

Still very much into Christmas movies since December but thanks for the recommendation 🙂 Used to be soooo crazy about horror movies, too! 😈