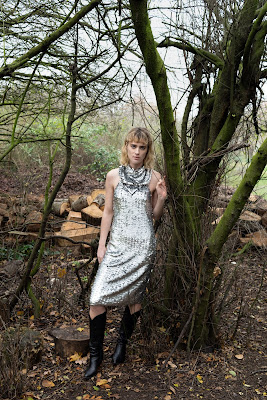 I don't know how to properly introduce this piece at the moment without being super weird about it (I'd probably be better at it if I wasn't trying to do it at 5pm on a Friday when I'm already blown out) but here goes: I have a great big and pretty personal essay that just went live over at Pajiba this evening where I get into why I think the character of Harper in Clea DuVall's Hulu holiday rom-com Happiest Season -- that'd be the one played by Mackenzie Davis -- has been getting too much hate from the internet in the wake of the film's release last week. I know, I know -- Hate is what the internet is good at! Just thought I'd throw my ten cents in on the other side since I felt a lot of her character's pain personally. Feel free to click on over and read it! (Oh and the above pic comes via Interview Magazine, where they have a nice chat with Davis & her Tully co-star Charlize Theron that touches lots of the subjects I broach in my piece.) And now I have to step away from the internet because writing things this personal even just here on MNPP always takes lots out of me but for Pajiba's larger audience I am faintly terrified.

This is such a good piece. I had more or less the same response you did to both the film and the internet backlash. I also had a staggered coming-out process, so the instinctive compartmentalization and anxieties about crossovers between different areas of life spoke to me. Would that most romcom protagonists were allowed to be this thorny, this motivated by everyday fears, this human. Ah well. I bet this film will be far more fondly looked back on a few years from now, once people get over their initial discomfited reactions.