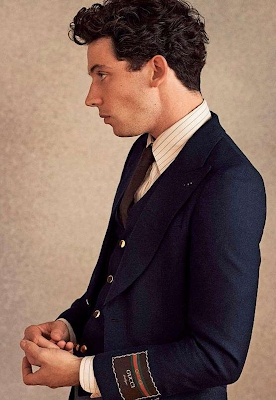 The fourth season of The Crown is dropping on our dare I say crowns quite soon and blessed be this means we're seeing a lot of our ear-friend Josh O'Connor popping up in our timelines -- Josh is returning as Prince Charles, and this season deals with the whole "Diana" thing. You know the one. Anyway I don't watch The Crown even though I should totally watch The Crown, but that's not gonna stop me from posting about the two you got that right two new Josh photo-shoots that appeared this week -- one for Gentleman magazine and one for Style, and yes those are the most generic men's fashion magazine titles I have ever seen in my life. Anyway funny enough the two magazines feature pretty similar photos of Josh sitting back on chairs, so I figured why not ask... (and click the pic to embiggen) 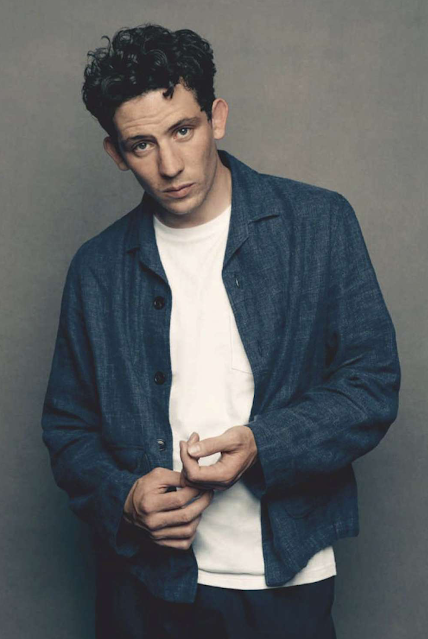 Who? Jason Adams When? 11:39 AM
Labels: gratuitous, Josh O'Connor, Which Is Hotter?

The Crown is well made, well acted, but I don’t buy the portrayal of that fucked up family. I watched some of the first season, and i just don’t believe a person like the queen is that relatable in reality. And I don’t feel it’s worth my time to try and empathize with them. Let’s force her to watch numerous episodes of stories of normal people and see how long she lasts.

Jason, PLEASE watch The Crown. I promise you... I can't believe someone like you has not even tried to tune in. Watch the first episode; better yet, the first two episodes.

The crown is well acted but I hate it so much. Maybe it’s just because I think they’re all spoiled pieces of shit. I don’t know... I love Josh but I never made it to his season.

I love the Crown... yes, it wants us to feel that some awful people are human, but every modern serial killer movie wants us to do that too and we're more than willing to go there, so why not with the royals? Josh is so wonderful as Charles and the way he is treated by his parents are so awful you just want to adopt him

I wasn’t sure about this show when it premiered. I watched maybe the first few episodes and lost interest quick. Mostly because none of the characters/people/issues in the first season had an relevance to my life or in any of my current interests. This new season, the fourth season was/is sum what different. I remember when I was a kid and princess Diana died and I remember her impact on the world. I’ve always sort of been fascinated with her, but very low key. I knew who she was, but I knew so little of her and her challenges with the royal family. This season introduced me to that world. Basically I’m saying her story line spiked my interest. Josh’s screen presence kept me alert, because he’s just beautiful in those uniforms. He’s also a great actor. But, the real gem of this show is Gillian Anderson’s performance. Damn! What a performance. So if you haven’t seen the first three season, I can assure you there is no need. I doubt I’ll go back and watch the other seasons, but I look forward to the fifth. 🤷‍♂️

Just finished bingeing this most recent season and it's probably the show's best? The shift in perspective this season of the audience as we see outsiders (Diana, Thatcher) reacting to the royal family is invigorating and turns the show on its head.

And as a big fan as I am of Colman she was given almost NOTHING to do last season so I was thrilled to see her being so damn GOOD this season. Maybe she just needed better stories/sparring partners, but hoo boy she delivered as did Josh and newcomer Corrin.

Has anyone else noticed Josh O'Connor's Prince Charles voice sounds a lot like The Simpson's Monty Burns?

I share a birthday with Queen Elizabeth II, so I've always been fascinated by the royal family and have a personal reason to LOVE the Crown. The development of the story is captivating and the acting sublime. One of your commentators is right. Olivia Colman didn't have much to do this season but smile and wear some nice things, but that's because the focus wasn't on the Windsors, but on Thatcher and her effect on the nation! Gillian Anderson deserved her Golden Globe as Thatcher. It was an outstanding performance (I haven't seen Streep's because I can't stand her). Josh O'Connor was good as Charles, but Emma Corrin was outstanding as Diana, whom I deeply admire. I didn't realize she had played Jordan Baker in the dreadful Baz Luhrmann Great Gatsby. I recommend you watch the Crown, but only if you're really into the royals. I also recommend The Windsors, which is hilarious, and gay actor Hugh Skinner is really funny as Prince William.

At this writing, I'm waiting for the return of Victoria on PBS!