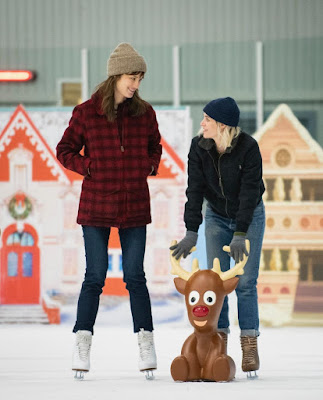 I don't know about you but after a million weepy gay movies watching this here trailer (down below) for Happiest Season -- a bright cinnamon-and-peppermint flavored holiday rom-com starring Kristen Stewart and Mackenzie "Mackenzie Davis!!!" Davis as girlfriends going home for the holidays -- feels like an invigorating shot straight into the stockings and holly jollies. See our previous posts here; this was directed by and co-stars Clea Duvall, alongside a ton of People We Adore, people named Dan Levy and Alison Brie and Mary Steenburgen and Victor Garber and Aubrey Plaza and delicious Jake McDornan and Mary Holland and Ana Gasteyer, and it hits Hulu on November 25th. Watch:
Who? Jason Adams When? 4:10 PM
Labels: Mackenzie Davis, Schitts Creek, trailers