Steve, Bring Me the Axe 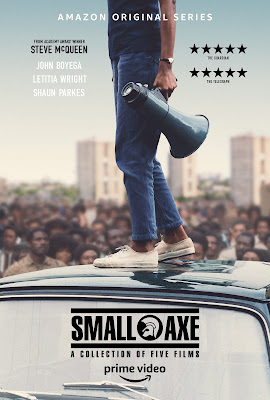 Lots of trailers today! Now comes our best-to-date look at the new thing from Shame and Hunger and Widows and 12 Years a Slave director Steve McQueen -- it's really hard to choose a single film to attach to his name, I just wanna go with every one of his bonafide masterpieces -- called Small Axe. I have talked about Small Axe a lot at this point but let's recap -- Small Axe is an anthology of five films all set in the same West Indian community of London where McQueen himself grew up, over the course of a few decades.

The films vary in length and you'll see a cast-member here and there float through another chapter, but they are all (supposedly) standalone films. I say "supposedly" because I have seen three of the five films already, and they all were standalone, but who knows what'll happen in the other two -- maybe all the characters from the three I've seen will show up and have a Battle Royale. (I would so watch Steve McQueen direct a remake of Battle Royale.) 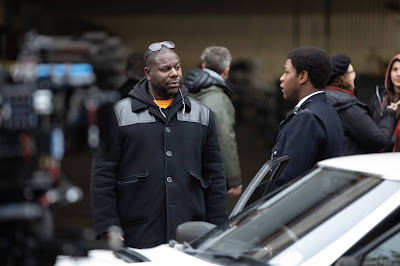 The first part is called Mangrove and it will premiere on Amazon on November 20th. I reviewed Mangrove when it screened at the New York Film Festival right here. It tells the true life story of Frank Crichlow (a truly phenomenal Shaun Parkes), the owner of a restaurant who finally has enough abuse from the police and fights back. It co-stars, among many, Black Panther's Letitia Wright. it is real fucking good, you guys.

The second part is called Lovers Rock, it premieres on Amazon a week later on November 27th, and I reviewed this chapter right here. This part is also real fucking good. The third part is called Red White and Blue, it premieres a week later on December 4th, it stars Star Wars phenom John Boyega as a police officer in training trying to buck the system from within -- I reviewed this chapter right here and, spoiler alert, it is real fucking good! Sensing a theme?

The last two chapters are called Alex Wheatle and Education, they air on December 11th and 18th respectively, and... I sadly have not seen these. Yet. You best believe I've been refreshing my inbox for screeners. Here is the trailer they just dropped this afternoon:

Point being I recommend you write all of these dates in your little pleather-cased date-books in ripe red ink immediately -- you will not want to miss this, the cinematic event of the year. I've seen some people call these "television" but I'm not categorizing them as such myself -- these are five films, a sort of Cinematic Universe of actual import. Imagine that. If you'd like the official descriptions of all five films hit the jump, I'll share them below: 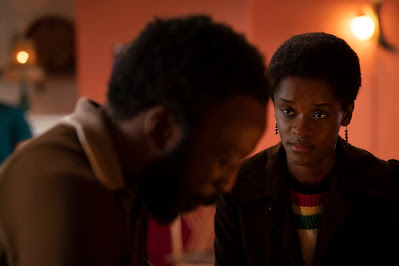 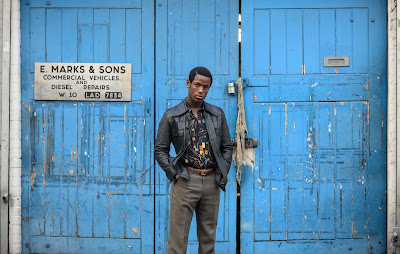 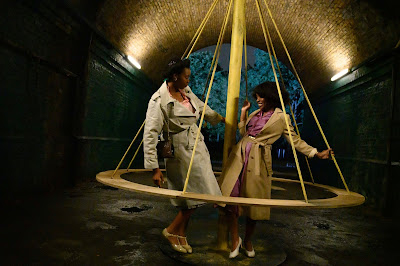 RED, WHITE AND BLUE (Premiere: Friday, December 4)
Red, White and Blue tells the true story of Leroy Logan, a young forensic scientist with a yearning to do more than his solitary laboratory work. When he sees his father assaulted by two policemen, he finds himself driven to revisiting a childhood ambition to become a police officer; an ambition borne from the naïve hope of wanting to change racist attitudes from within. First, Leroy has to face the consequences of his father’s disapproval, never mind the blatant racism he finds in his new role as a despised yet exemplary Constable in the Metropolitan Police Force. John Boyega (Star Wars: The Force Awakens) and Steve Toussaint (Prince of Persia) star with talented newcomers Tyrone Huntley, Nathan Vidal and Jaden Oshenye. Red, White and Blue was co-written by Courttia Newland and Steve McQueen. 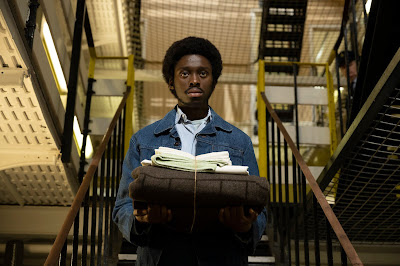 ALEX WHEATLE (Premiere: Friday, December 11)
Alex Wheatle follows the true story of award-winning writer, Alex Wheatle (Sheyi Cole), from a young boy through his early adult years. Having spent his childhood in a mostly white institutional care home with no love or family, he finally finds not only a sense of community for the first time in Brixton, but his identity and ability to grow his passion for music and DJing. When he is thrown in prison during the Brixton Uprising of 1981, he confronts his past and sees a path to healing. Sheyi Cole stars opposite Jonathan Jules. Alex Wheatle was co-written by Alastair Siddons and Steve McQueen. 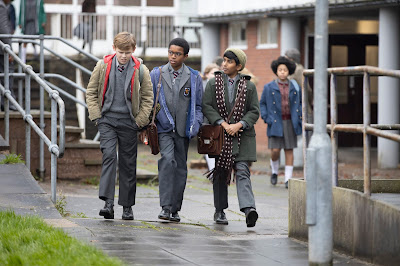 EDUCATION (Premiere: Friday, December 18)
Education is the coming of age story of 12-year-old Kingsley, a boy with a fascination for astronauts and rockets. When Kingsley is called to the Headmaster’s office for disruptive behaviour in class, he is shocked to discover his transfer to a school for those with “special needs.” Distracted by working two jobs, his parents are unaware of what was an unofficial segregation policy at play, preventing many Black children from having the education they deserve until a group of West Indian women take matters into their own hands. Newcomer Kenyah Sandy stars opposite Sharlene Whyte (We Hunt Together, Casualty), Daniel Francis (Once Upon A Time, Homefront), Tamara Lawrance (The Long Song, Kindred) and Josette Simon (Wonder Woman, Silent Witness, Law & Order: UK). Education was co-written by Alastair Siddons and Steve McQueen.
Who? Jason Adams When? 4:50 PM