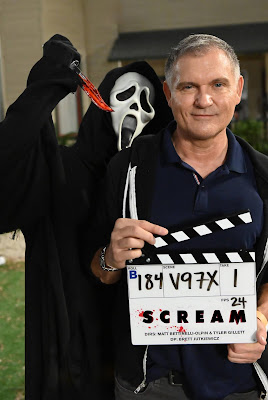 Scream writer Kevin Williamson just announced on his Instagram that the fifth Scream film has 1) finished filming, and 2) been officially titled... Scream. Just Scream. No 5. No V. No 5cream. I was really hoping for 5cream, pronounced "Five-Cream". (Credit where credit's due: I stole that joke from my beloved Gaylords of Darkness.) Here's Kevin's Insta-statement:

"That’s a wrap on Scream, which I’m excited to announce is the official title of the next film! Nearly 25 years ago, when I wrote Scream and Wes Craven brought it to life, I could not have imagined the lasting impact it would have on you, the fans. I’m excited for you to return to Woodsboro and get really scared again. I believe Wes would’ve been so proud of the film that Matt and Tyler are making. I’m thrilled to be reunited with Neve, Courteney, David and Marley, and to be working alongside a new filmmaking team and incredible cast of newcomers that have come together to continue Wes’s legacy with the upcoming relaunch of the franchise that I hold so dear to my heart. See you in theatres January 2022."

Knowing that the 1996 Scream basically invented (give or take a Wes Craven's New Nightmare) the concept of meta-horror, at least for mainstream audiences, it feels like calling the fifth film just "Scream" -- while having all of the same actors still there continuing on -- will end up being a meta-joke of its own, one that we'll "get" once the movie arrives, so I'll try not to huff and puff about it too much. We'll all still call it Scream 5 when we talk about it, I'm sure. (Or Five-cream, even maybe definitely!) 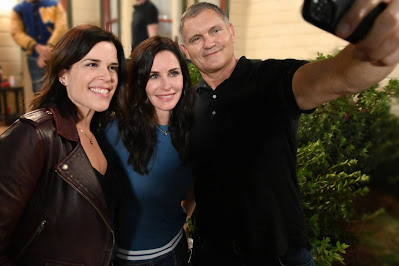 Thank god it looks like she won’t have those bangs!!