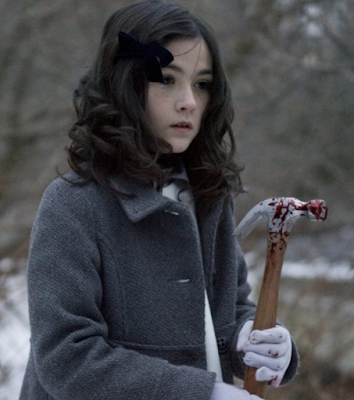 This is certainly the weirdest movie news I will be reporting today, but they are making a prequel to the 2009 film Orphan! And the great Isabelle Furhman is going to be back as Esther! This sequel's very existence is kind of a spoiler for the 2009 film, which has one of the greatest twists of all the twists, but eleven years on if you don't know what Orphan's about you don't care, right? Anyway I'm still not going to spoil it but I will warn you that this Variety link does just come right out and do that, so you've be warned. The prequel is called Orphan: First Kill; sadly the great Jaume Collet-Serra isn't returning to direct -- William Brent Bell, the guy who directed The Boy and The Devil Inside, neither very good movies, is taking over. But I've never seen Fuhrmann be bad in anything, so I'll be there, my neck ribbon holding my damn head on after it fell off from this insane news.
Who? Jason Adams When? 5:00 PM
Labels: horror, Isabelle Fuhrman