Chaos in the Making 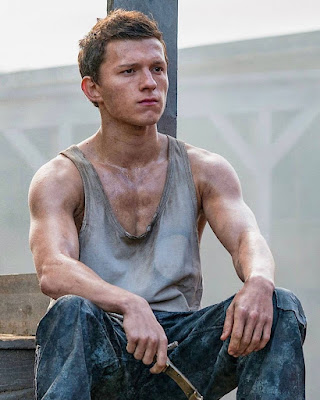 Back in March of 2012 the first Hunger Games movie had come out, and by that April I was already posting about how studios were rushing to adapt every Young Adult novel in existence. One of them was Patrick Ness' trilogy of Chaos Walking books, which got no less than Mr. Charlie Kaufman attached to adapt, which got no less than yours truly to read the books immediately. And they're pretty good, I recall! (I remind you, it's been eight years.) Very weird, and seemingly un-filmable, with their noisy clouds of visible thoughts -- an idea which you can see would draw somebody like Charlie Kaufman in. Anyway that was eight years ago -- eventually Tom Holland and Daisy Ridley and...

... Mads Mikkelsen got cast and Go director Doug Liman got hired and the movie took ages to make and then it sat on a shelf for more ages and I think they reshot a bunch of it at one point and and now we have a trailer, voila. (Funny enough you can see Tom Holland's age jump around in just this footage here.) The movies, they can be weird and wily beasts towards the finish line. Anyway here's the trailer:
Once Charlie Kaufman got the kibosh and this thing got delayed and delayed I have to admit my interest waned, but we'll see when it "comes out" in January -- a January release! Always a good sign! But if nothing else it appears that Spider-twink spends a lot of the movie in a tank top, so all's not lost. On that note I made some gifs of precisely that, right on after the jump...

There’s been rumours for ages that we see some Holland butt in this. I doubt we will but if we do I hope it’s from the reshoots as he got a bit beefier.

Holland was so good in “The Impossible” and I initially liked him in the MCU movies. But I’ve grown tired of his “Ah, shucks, Mr. Stark” schtick, I’ve pretty much lost interest in him. Can this movie that was once called “unreleasable” be any good?

You make a valid point Frank, but with his recent role in The Devil All The Time and his apparent darker turn in the upcoming Cherry he may be turning a creative corner.

News of Twunk Butt exposure in this is enough for me.

Another boring white boy gets lead roles handed to him...what else is new?