Worried Man With a Worried Mind 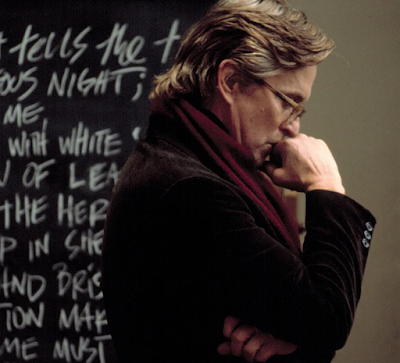 Wonder(ful) news, everybody -- Curtis Hanson's magnificent 2000 film Wonder Boys is finally finally finally getting a blu-ray release! And soon too -- it's hitting on November 24th! Just in time to give it to every single person you know for the holidays. I was just rage-tweeting about this film's lack of a new release back in February when the film celebrated its 20th anniversary -- I did a big post giving it love right here -- and this couldn't come sooner, as my DVD has officially started skipping, so oft has the movie gotten played and re-played over the past two decades. Sad this release won't have any new extras -- talk about a movie overdue deserving of a glorious Criterion-ing. But we'll make happy due with this for now.
Who? Jason Adams When? 3:57 PM
Labels: Alan Tudyk, Frances McDormand, Tobey Maguire

I avoided this movie for years because I find Michael (and his dad) to be a vile piece of shit but you have me intrigued, I must say....

I love this movie, haven't seen it since it came out, maybe I'll p/u the disc.

Anon -- I am by no stretch of the imagination a Michael Douglas fan -- I hate his father with the heat of a thousand suns -- but he's wonderful in this; it really is one of my favorite films of all time. It also, though, hits my sweet spot of movies about writers and small northeastern college towns in the snow and people being weird and gay and Frances McDormand, so I might be biased.

I wasn’t so crazy about this film. But I love MD. His performance in The Game will always be my favorite.

You can rub some salad dressing on that DVD to make it work better until the Blu-Ray comes out.

Whoa, whoa, what have I missed about Michael Douglas and his dad that makes them so awful?