Sleep For Chance To Durrr 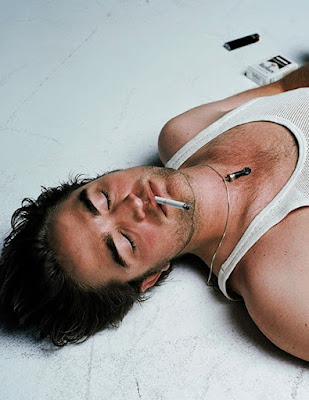 So... how is everybody doing? If you answered, "Not great, Bob!" then you, me, simpatico, my friend. I have officially reached the point in pre-election panic-mindedness where every single thought I have makes it about five inches in front of my face before it goes splat, a bug on the windshield. Focus is unavailable for comment. I can't write shit. I can't think shit. All I have in me is a wild-eyeing of the clock and a deep need to take enough pills to make me sleep until Wednesday at the soonest.

That's not possible -- I decided I'll vote on Tuesday like an old-fashioned rube -- so instead my plans consist of turning off as much of the world as I can for the next sixty-ish hours and burying myself in horror movies. Tonight through the time you see me back here on-blog Monday morning, that is where I am gonna be. Holding my breath and throwing my phone in the toilet.

I feel as if this Halloween week has been more of a bust than I'd intended -- although I have been having fun with my "13 Rats of Halloween" series, and there is one more final post in that set for tomorrow! -- but considering the world... I hope you'll forgive me. Okay, that's more than enough self-pity and drear for any damn body! I will shut up now, I will shut up after I say one more thing -- Vote. Vote please. Vote like the world matters. Vote for decency, the future, the children, whatever the fuck it takes. Just vote. And then we dance.

If it makes you feel better, I have already voted--did so in the first week of October, as a matter of fact. A LOT of people already have, and now we're all waiting with you. I actually find it helpful to vividly imagine where we're going to be this time next year, with the pandemic over and sanity restored to the White House and Congress, and a proper Halloween that we can all celebrate together. I just refuse to imagine it any other way.

You're great, Jason. Do what you need to do.

I recently moved from Pa to NY to move in with my boyfriend (still can't believe I did it). I voted by mail before I left. Here's for tomorrow🤞